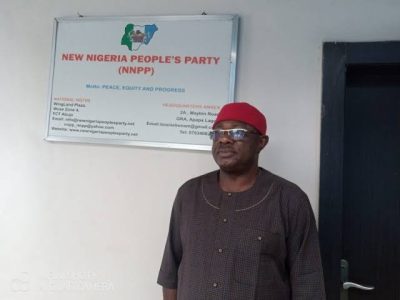 New Nigeria Peoples Party (NNPP), has become the beautiful bride of Nigeria’s politics, attracting defections from both the PDP and APC.

Dr Boniface Aniebonam, founding member of the party told the News Agency of Nigeria (NAN) on Sunday in Lagos that Sen. Rabiu Kwankwaso, a former governor of Kano State had signed high ranking and huge membership to the party in less than three months.

According to him, it is NNPP’s divine time to provide leadership that is poised to create a new Nigeria.

There had been a gale of defections into NNPP in Kano, Jigawa, Kaduna and other parts of the country.

Ten PDP lawmakers and three APC lawmakers in Kano had recently defected to the NNPP while the deputy speaker, Kano State House of Assembly, Alhaji Zubairu Massu, also on Friday, defected from the APC to NNPP, alongside some other former lawmakers.

Also in Osun, a chieftain of APC, Mr Muslihudeen Adekilekun on Saturday said he had defected to the NNPP.

Aniebonam told NAN that in 21 years of its existence, the NNPP now has offices in all parts of the federation.

He said the party ”is gradually becoming a movement” and urged Nigerians to join the winning team.

“We are the beautiful bride in the North as it is and we hope to expand to all parts of Nigeria as the best option for Nigerians,” Aniebonam said.

He noted that, as a party with a divine mandate, NNPP would ensure that its primaries were fair to all, including the new entrants.

Meanwhile, Aniebonam told NAN that the party planned to translate Nigeria from being a “consumption nation to a producing state” to address economic challenges.

According to him, the basis of some of the challenges facing the nation is because the country is no longer producing all it consumed, hence the challenges among others.

The NNPP founding member said that the panacea to youth engagement was to move Nigeria from being a consumption nation to a producing nation.

He said that NNPP was committed to engaging the youth by reviving all moribund industries to gainfully engage the Nigerian youths.

Aniebonam said that the party would invest in education and encouraged both the learners and educators.

He said the party would provide right leadership to address most of the current challenges facing the nation.

On women inclusion in politics, Aniebonam said that women were more prudent because of the fear of God in them, hence the committment of the party to provide them good representation in governance.

Aniebonam, however, said that not many women were coming out to contest elective positions, saying ”power is never served but taken”.

He said the NNPP platform was available for women who wanted to join in the movement for creating a new Nigeria.

He added that the cost of nomination and expression of interest forms had been reduced for the women.

He said that a woman would be contesting governorship election in Ogun on the platform of NNPP and there could be more.

“What we need to do more now is to empower these women through appointments.

”With that, they will grow and be able to move in for elections,” he said.

Why Akeredolu appointed our son as DG – Betty