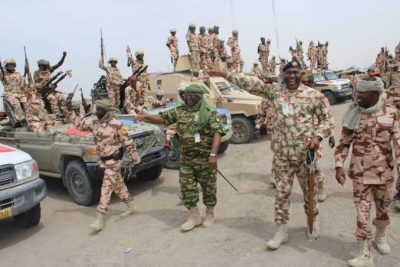 Lt. Col. Kamarudeen Adegoke, the Chief of Military Public Information Officer HQ MNJTF N’Djamena, who said this in a statement released in Maiduguri, said the terrorists were killed in 30 separate encounters .

Adegoke said that the Force Commander, Gen. Abdul Khalifa stated this during an appraisal meeting with all Commanders of the MNJTF drawn from all sectors.

Khalifa said that the meeting was designed to appraise the operations so far in preparation for the next decisive stage.

He said that an increasing dependence on Improvised Explosive Devices (IED) by the insurgents was noted and necessary counter measures were proffered.

“About four IED making factories were destroyed in the course of the operations so far.”

He praised the decisive role of the Air component of the MNJTF/ Operation Hadin Kai for the remarkable role it played in taking out several enemy camps, equipment and commanders.

The force commander said the latest being Abu Ibrahim, an ISWAP leader ( Khalifa) in the Lake Chad Tunbumas, who was a leader before in the Timbuktu General areas.

He said that the achievement was recorded due to the synergy and cooperation with Operation Hadin Kai .

According to him, more than 52,000 terrorists comprising fighters, those conscripted by force, and their families have surrendered in the MNJTF and Op Hadin Kai areas of operational responsibility.

He called on the terrorists be they Boko Haram faction or ISWAP to abandon the criminal organisation and surrender like thousands of their compatriots had done before it becomes too late.

“The entry of the Chadian contingent provides additional firepower in terms of armoured personnel Carriers, MRAPS and other combat enablers and urged the criminal Boko Haram Terrorists/ISWAP be hunted and wiped out wherever they are,” he said.

He also praised the maritime efforts so far and said he looks forward to more successes in the next few days and weeks.

“Regrettably, the Operation recorded about seven casualties comprising six soldiers and a member of the Civilian Joint TaskForce supporting the operations.

“Several troops have also been injured but are recuperating well.”

He prayed for the repose of the heroes who paid the supreme sacrifice and quick recovery for the injured.

The force commander also commended the officers and men of the MNJTF for their commitment and gallantry, noting that history would remember their role in ending the scourge of terrorism in the Lake Chad Basin.(NAN)