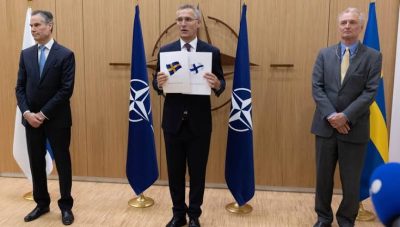 The Swedish and Finnish ambassadors on Wednesday morning formally submitted their applications to join the North Atlantic Treaty Organisation (NATO) to its secretary-general Jens Stoltenberg.

Accepting the applications at NATO headquarters in Brussels as captured in an online video ceremony on Wednesday, Stoltenberg described the move as a “historic step” in a “critical moment” for European security against the backdrop of Russia’s war in Ukraine.

Stoltenberg said the alliance would assess the membership bid as quickly as possible, but the security interests of all allies “have to be taken into account.”

The NATO chief was referring to recent objections from Turkish President Recep Tayyip Erdogan on Monday.

Erdogan said he will not agree to the accession of two countries that sanctioned his country.

He said that both nations support “terrorist organisations, a reference to the banned Kurdistan Workers’ Party (PKK) and the Kurdish militia People’s Defence Units (YPG) in Syria.

I allow Michael Blackson have one side chick per month, says fiancee