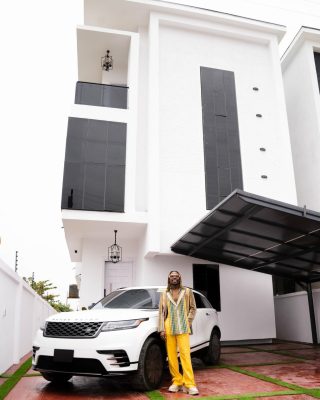 Asake, a fast-rising Nigerian musician with the real name Ahmed Ololade, said one call from his boss, Olamide, changed his life.

Asake stated this on Twitter on Thursday after he posted a picture of his new home.

“Went from hustling for free bedspace to investing in real estate,” Asake captioned the post.

Went from hustling for free bedspace to investing in real estate 🏡 pic.twitter.com/8bThB7fnVw

However, after massive congratulatory messages on his page, the singer gave all the praises to Nigerian rapper Olamide.

“One call from Olamide and everything changed,” Asake noted.

In a chat with HipTV, the ‘Trabaye’ singer narrated his journey to becoming a YBNL-signed music artist.

Asake said a deal was the last thing he expected after he was told Olamide had decided to feature on his song.

He said he had been begging the rapper since 2020, hence, the reason he clutched at the opportunity.

“I was not at home. Something happened between me and my guys. I left the house and was very sad. On the third day, I came back to the house. My guy called me saying Baddo had jumped on my song,” Asake said.

“I didn’t even think Olamide was going to sign me. It occurred to me that 2022 was sealed [as a stellar career year for me] with the collaboration alone. A week after I dropped the song, Olamide called, asking that we meet.

“I tried out multiple outfits looking for something he would like to see on me. This was because Olamide was someone I respected. Before he signed me, I’d been begging Baddo since 2020 to do so.

“I got to his head and he asked if I would like to join YBNL. I said I’m ready but he asked me to go look for a lawyer and think about it. I asked him to sign me immediately. I didn’t need a lawyer because I so much loved the family.”

He ventured into music at a young age. He also showcased his talent through freestyle videos on social media.

His big break came with the release of his hit ‘Lady’ which became popular among music lovers and celebrities.

Olamide announced the signing of Asake in February 2022.