Igbos owe me votes; Peter Obi is my tenant in Lagos, Tinubu says 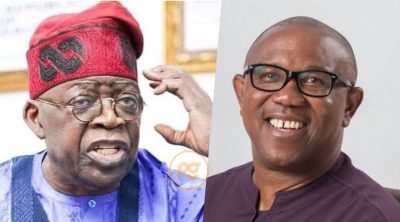 The APC flag bearer said, as Mr Obi’s “landlord,” he is waiting for the presidential poll to trump his opponent.

An overlord in Lagos, Mr Tinubu continues to exert immense influence on the levers of power in the state.

“You see Lagos how e be? Go there now. You will not want to come back. The man wet won run in Labour Party (Peter Obi), he no fit stay in Anambra,” boasted Mr Tinubu, a former Lagos governor. “He moved to Lagos. And I am his landlord. I no de worry am. I just dey wait for the day I beat am for election.”

He urged APC supporters and members in Abia to ensure the party’s victory in the February 25 and March 11 elections.

“For president, you vote for me. On March 11, they will bring governorship. But before then, on the day you are voting for president, you must vote for senator, right? APC. You will vote for us. After that, go home,” Mr Tinubu told the cheering crowd.

The former Lagos governor made this statement at Tuesday’s APC rally in Abia.

Mr Tinubu, 70, is contesting the presidential race against frontline candidates, including Peter Obi of the Labour Party (LP), Atiku Abubakar of the Peoples Democratic Party (PDP) and Rabiu Kwankwaso of the New Nigeria People’s Party (NNPP).

The former Lagos governor and APC national leader believes it is his “turn” to be Nigeria’s president despite being assailed by corruption and drug trafficking allegations.

His frail physical and mental conditions have also raised questions about his capacity to preside over Nigeria, Africa’s most populous country. (Peoples Gazzete)