Ilorin agog as Buhari’s Chief of Staff, Gambari returns to State for Sallah 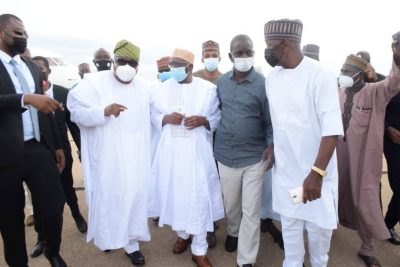 Ilorin, the Kwara State capital went agog on Sunday with the first homecoming of the Chief of Staff to President Mohammadu Buhari, Professor Agboola Ibrahim Gambari.

Professor Gambari was in Ilorin, his country home for the Muslim Eidel-Kabir celebration.

He arrived at the Ilorin International Airport to the warm embrace of thousands of citizens and top government officials led by the state deputy governor, Kayode Alabi.

Professor Gambari who touched the Ilorin International Airport at exactly 5.27 p.m on Sunday, amid jubilation was received by the deputy governor who stood in for Governor Abdulrahman Abdulrazaq, Speaker of the State House of Assembly, Secretary to the State Government, serving senators, and former Nigerian Ambassador to Malaysia, Alhaji Nura Mohammed, among others.

Professor Gambari’s convoy drove straight to the Emir of Ilorin’s palace, where he held a private meeting with Dr Ibrahim Sulu Gambari.

Gambari’s convoy had navigated through the heavy traffic of supporters displaying various placards welcoming him home.