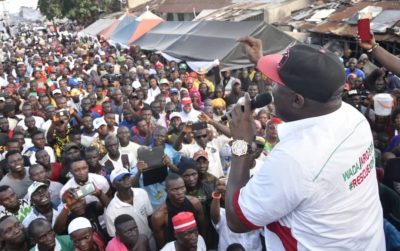 May I herein solemnly bear witness that Nigerian politicians are geniuses at playing politics. They can scheme and strategise, manipulate and manoeuvre, plot and politick for 40 days and 40 nights non-stop just to score a political goal. They, however, do not know — or care about — the core purpose of politics and power. They almost always end up leaving the people high and dry — after plotting for and getting power. Yet, the purpose of politics, if I may allow myself to suggest, is the greater good of the society, not personal comfort. Socrates, according to Plato in Gorgias, argued that the goal of politics is to make the citizens as good as possible to live the best lives.

I am well aware that politics does not foreclose self-interest or personal profit. But, centrally, the progress of the society should be the primary objective, not a bonus or an after-thought. To the archetypal Nigerian politician, power is an end in itself. Or, put more fittingly, power is a licence to become a deity, to amass and flaunt obscene wealth in the midst of wretched poverty, and to deploy raw state power to oppress or suppress others. Other paramount objectives of power, from what we can see, are: to enjoy the perks of office (such as the fortress of personal security, use of convoys and blaring of sirens), to subvert due process, and to exert impunity. To be fair, politicians still remember to build the odd road, whitewash public schools and sink boreholes here and there. Some, surprisingly, build bridges, drainages and hospitals.

I admit that I am exaggerating the failures of Nigerian politicians. I seem so angry and disappointed that I have chosen to tar them with the same brush. I apologise for that. However, if really the “greater good of the society” were the priority of politicking in Nigeria, we would not be where we are and I would not be needing to exaggerate things. If the zeal with which politicians politick were diverted to delivering good governance, Nigeria would be among the world’s most developed countries, or at least be an upper middle-income country. Sadly, all the all-night meetings and cross-country junketing are not about power supply or out-of-school children.

I generally define “politics” not the way political scientists would love it. I prefer the entry in the Devil’s Dictionary: “A strife of interests masquerading as a contest of principles” or “the conduct of public affairs for private advantage”. I define politicking thus: to engage in political intrigue, take advantage of a political situation or issue, resort to partisan politics, etc.; exploit a political system or political relationships; to deal with people in an opportunistic, manipulative, or devious way. I actually took that from dictionary.com.

More so, we are very fluid with the way we identify ourselves — depending on the issue at hand and the political points we intend to score. You could be a northerner in one instance, thereby identifying yourself by region; or as someone from the north-central, by geo-political zone; or as a Yoruba, by ethnic origin; or as a Christian, by religion; or as a Kogite, by state. It all depends on what you want to achieve. You can counter an argument today using one identity and support it tomorrow using another identity. I am confident enough to think that this plays out very well in national discourse. You take a position that suits you per time. You can argue for federal character or zoning today and argue against it tomorrow. It is all politics.

The easiest way to whip up sentiments is to ride on religion and ethnicity. The poor people are recruited and manipulated to kill and maim others under the pretext of fighting for their rights or defending their interests. Strikingly, when it comes to sharing the booty, Nigerian politicians are of the same ethnic stock and religion. They speak the same language. They worship the same Mammon. They are the best of friends. But when it comes to delivering the dividends of democracy, when it comes to working for the greater good of the society, they resort to playing up politics and the ordinary people will team up with them to fight perceived common enemies. Nigerian politicians have perfected a way of masquerading personal interest as group interest. They utter the right words, construct the right phrases and unfurl the right sentences to make us believe they are doing us some good. It is all about them.

This theme of “politicking” is present in most of the selected articles in this book. The pieces are grouped in eight parts. My unpublished works are under Part I. I had written and intended one or two for publication but they were overtaken by events and I had to rest them. I had also written and kept some in the cooler because they were not time-bound. Part II is a selection of 10 of my most popular articles. It does not mean they are the best. Rather, they are the ones that provoked the most passion, either negatively or positively, in readers. Some of them are being circulated on social media till this day.

Part III can be called the “core” of the compilation. It contains a series of articles on politics and politicking in Nigeria — how politicians masquerade personal interest as national interest. I easily see through their gymnastics and rhetoric whenever they launch into the new seasons of political intrigues. I do not usually fall for the public show. Part IV houses articles on Nigeria’s leadership challenges which I complain about all the time, while Part V dwells mostly on the ups and downs of nation-building which so often threaten our corporate existence and progress.

Part VI, on “Democracy and Democratisation”, contains articles that seek to make sense of our slow march to democracy and the various landmines on our path. Part VII isolates my articles on economic policies into a segment while Part VIII contains miscellaneous articles on entertainment, healthcare, tributes and other diverse topics.

My worldview, as evident in my opinions for decades and as the reader will discover in this compilation, is shaped by some fundamental beliefs. One, I do not see diversity as a disease. That makes me believe that the Nigerian union can work despite our obvious differences — assuming we manage things properly. Two, balkanising Nigeria may solve one big problem but create a bigger one. There will always be internal differences to manage even if we divide Nigeria village by village. Three, Nigerians across all ethnic, religious and regional lines suffer from similar problems and challenges — and finding solutions should be the focus of public discourse rather than spending so much energy amplifying what divides and damages us.

Four, and perhaps most important of all, is my belief that Nigeria’s progress is stunted by inept and corrupt leadership. With the right leadership at all levels, the country will boom and blossom. Sadly, Nigeria has not really enjoyed world-class leadership at either national or subnational level. What most of the leaders do very well is politicking rather than leading. The politics of purpose is often missing, giving way to prebendal politics and politics of pulling the wool over the people’s eyes through the highly marketable sectional sentiments. Playing politics the right way — that is, for the greater good of the society — is critical to addressing the political, social and economic issues.

Good enough, I do not believe Nigeria is irredeemable. I, for one, do not deny the mammoth problems. They cannot even be denied. My articles highlight the problems. But I equally proffer the fundamental remedy: leadership, leadership, leadership. Competent leadership. Patriotic leadership. Purposeful leadership. Let our politicians divert all the passion, zeal, excitement, devotion, fervour and commitment with which they politick into proper leadership. Nigeria would be reformed and transformed in a matter of years. That is my belief. For that to happen, though, politics of purpose must replace this politics of narcissism.

*This is the introductory chapter of my debut book, ‘Fellow Nigerians, It’s All Politics’, which goes on general sale tomorrow, October 3, 2022. Available at leading bookstores and on Amazon.

AND FOUR OTHER THINGS…

Since I learnt how to read ABC and write 123, Nigeria’s independence anniversary has always generated mixed comments. Some will say the country is a failure and a disaster and there is nothing to celebrate whatsoever. Some will say it’s been quite a journey, full of forward movements and landmarks — and that we should roll out the drums. Some will say Nigeria has made progress but it can be better than this and we should keep forging ahead with determination no matter the problems and challenges. The optimists, pessimists and realists are never going to come to a consensus, but that will not stop me from saying Happy Independence Anniversary. Cheers!

A federal high court in Abuja on Friday nullified the nomination of Alhaji Gboyega Oyetola as the APC governorship candidate in the July election in Osun state. The court ruled that the nomination was “unlawful and unconstitutional” because Mallam Mala Buni, who submitted his name to the INEC, violated the provisions of section 183 of the constitution and section 82(3) of the Electoral Act 2022, by holding two positions at the same time: governor and party chairman. A similar observation was made on the Ondo election by the Supreme Court but there no final pronouncement. If Buni had continued as chairman, APC would probably be in soup ahead of the general election. Near-miss.

The 18 presidential candidates have signed a peace treaty ahead of 2023 electioneering. The National Peace Committee, which started the idea of candidates entering into a voluntary agreement to run a decent campaign, gained prominence in the 2015 elections. The 2011 polls were one of the bloodiest in our history, with hundreds of people, including youth corps members, killed and property razed in the north after President Goodluck Jonathan of the Peoples Democratic Party (PDP) was declared winner by the Independent National Electoral Commission (INEC). Although there have been pockets of violence, elections have been largely peaceful since 2015. Progress.

Campaigns for the 2023 elections officially kicked off on September 28, with Alhaji Atiku Abubakar (PDP) launching a book and Mr Peter Obi (Labour Party) holding a rally in Jos. Asiwaju Bola Ahmed Tinubu, the APC candidate, was not even in the country as his party continues to battle internal dissent over the composition of the campaign council and is yet to get started. With the elections still about five months away, parties can still afford to drag their feet, but there may be a price to it. There is still a lot to play for: some can still gain supporters and others can still lose. I project that things will be boring for now and the real drama will begin in December, even January. Climax.