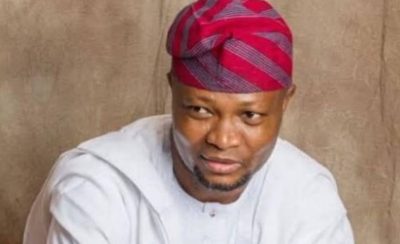 The Lagos State gubernatorial candidate of the People’s Democratic Party (PDP), Dr Abdul-Azeez Olajide Adediran, also called Jandor has fingered the All Progressives Congress (APC) government in Lagos State as the sponsor of the petition to the Independent National Electoral Commission (INEC) by a Civil Society Organisation (CSO)

A press statement signed by  Gbenga Ogunleye, Head, Media and Communications of JANDOR4Governor Campaign Organization on Thursday, noted that their attention has been drawn to a hatchet job carried out by an agent of the Lagos State APC who according to them pretends to lead a phoney CSO alleging that the governorship candidate of the PDP in Lagos State and his running mate, Olufunke Akindele violated INEC regulation on electioneering campaign.

“The pretender, Nelson Ekujumi, a known publicist of the Lagos APC, who claimed to be the Executive Chairman of a CSO named Committee for the Protection of Peoples Mandate (CPPM) petitioned INEC over a supposed breach of the 2022 Electoral Law by Jandor and his running mate.

“Ekujumi alleged that the Lagos PDP Guber candidate and his team engaged in political campaigns of canvassing voters ahead of the official kick-off date in violation of the law via a documentary aired on Arise TV to commemorate the 2022 International Youth Day on Friday 12th of August 2022,” the statement added.

The PDP family maintained that they are not surprised by the baseless petition sponsored by the APC government which according to them has found itself in an abyss of public opprobrium and in recent times, has been throwing tantrums over the rising popularity of Jandor and the Lagos PDP.

“We wouldn’t have dignified the rabble-rouser with a response since we are sure that INEC, as the unbiased umpire will educate him and his paymasters on the difference between electioneering campaign and sensitization awareness on International Youth Day. But for the need to expose the charlatans from misleading the public, this response became necessary.

“It is of public knowledge that even the APC and its guber candidate have taken huge advantage of this provision to the point of preventing other political parties from the use of advert space in the state while he consistently inundates the voting public with his ambition to seek another term in office with his messages of “Lekan si” on different media spaces. Even its presidential candidate is everywhere with his “Emi lokan” political appeal,” the PDP candidate stated.

According to the statement, the content of the documentary claimed to have violated the Electoral Law would not have been aired by Arise TV or any other national television if it had violated any known law, stressing that they expect the APC to find fault in any efforts to commend and motivate the resilient Nigerian youths who they have tagged “the Lazy Youths” especially on the occasion of the International Youth Day because of the memory of the sad event of the massacre of some youths during the End SARS protests still hunt them.

Jandor and Lagos PDP will not be distracted from the vision to offer a breath of fresh air to the good people of Lagos state, especially the youths who have suffered untold hardship and total neglect from the corrupt and clueless APC-led state government and its godfather for over two decades.

“We, therefore, enjoin the voting public to ignore the baseless sponsored petition and to continue to get prepared to massively vote out the APC in the 2023 general elections,” the statement further added.