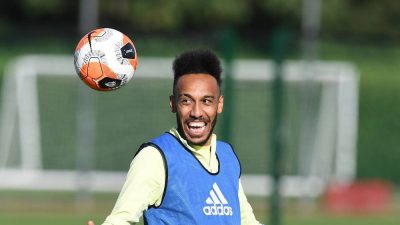 Chelsea are very confident Barcelona will accept their £22million offer for Pierre-Emerick Aubameyang, football.london understands. The Blues are still trying to sign a striker before next month’s deadline and it looks as if they may have taken a big step forward.

Thomas Tuchel is determined to bring the 33-year-old back to the Premier League after he left Arsenal on controversial terms back in January. Aubameyang was stripped of the captain’s armband at the Emirates Stadium after multiple disciplinary issues and his contract at the Gunners was then terminated, leaving him free to move to Barcelona.

His time at the Nou Camp has seen him score 11 La Liga goals in 18 appearances, but despite the impressive record, he could be sold before the window closes. While Chelsea are confident they can reach a deal with Barcelona, personal terms still need to be discussed.

Tuchel is a huge fan of the Gabonese forward, after the two had such a successful time working together while at Borussia Dortmund. The Chelsea head coach was asked about the possibility of signing Aubameyang last week and a smile came to his face when talking about him.

“This is totally separate from anything that is happening now, but I enjoyed a lot working with Auba while I was at Dortmund,” Tuchel said. “Some players stay your players because you were very, very close, and Auba is one of those players.

“There was always straight away this close bond. They always stay your players in a way.”

If Aubameyang is signed, then the ongoing links to Cristiano Ronaldo surely must die. The want-away Manchester United forward continues to be linked with a move to Chelsea as he seeks another opportunity to play Champions League forward.

Rather understandably, it’s understood new co-owner Todd Boehly is keen to sign Ronaldo because of what he will bring to the club commercially and financially. However, Tuchel – who is having much more of a say on transfer-related business this summer – did not sign off on the idea of bringing the 37-year-old to Stamford Bridge.

Meanwhile, talks are ongoing with Leicester City over a deal to sign Wesley Fofana. Chelsea are quietly confident they can reach a deal with the Foxes to sign the 21-year-old defender. A third offer for Fofana is expected to go in soon, with Chelsea involved in back and forth talks with Leicester over the structure of the bid.