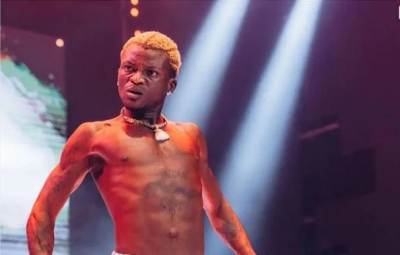 Until December 2021 when he put out ‘Zazoo Zeh’, his hit track featuring Olamide, and Poco Lee; Portable was largely unknown in the music landscape.

But the 27-year-old musician has witnessed a meteoric rise to fame since then.

With his street-smart demeanor and uncommon vigour, he has amassed a significant fanbase and shared the same stage with bigwigs in the music industry including Wizkid.

For an industry that boasts of immense talents, creativity, and strong personalities, making the headlines on regular basis require something extraordinary.

Portable, however, has been an exception. The singer has managed to remain in the news — although not for his musical prowess.

Portable’s controversial personality has been integral to his surging popularity.

But if recent happenings are anything to go by, it might become his major problem in the coming weeks.

THE MAN IN THE EYE OF THE STORM

Portable has faced intense backlash in recent weeks due to what many see as “unruly” attitudes.

Some days ago, he provoked public outrage after a video of him allegedly asking his team to brutalise a man in Ogun state surfaced online.

The state police had ordered the singer to report himself to its command over the incident.

Abimbola Oyeyemi, the state police spokesman, said the command would not condone such “unruly and violent behaviour”, especially from people expected to serve as role models.

“The flagrant display of impunity by ‘Portable’ in the viral video is condemnable and if not checked, it will send a wrong signal to the youths who are looking up to him as a role model,” he had said.

“Jungle justice has no place in our laws and whoever embarked on it must be made to feel the weight of the law, no matter the status of such person.”

While the controversy trailing the incident is yet to die down, the musician was in the public eye again on Tuesday when his aide reportedly killed a motorcyclist.

Theresa, his manager, had said the motorcyclist died shortly after he was rushed to the hospital.

The driver was said to be on an errand when the accident occurred at the Iyano Ilogbo axis Ogun state.

The musician, who was at his child’s naming ceremony when the incident happened, has since reacted to those linking him to the car crash.

“Na lie ooo, no be me carry car kill person, I dey naming ceremony of my child. I’m really sad that the person died. I visited the hospital and tried to help the victim before he passed away,” he said.

It remains to be seen how the matter will swing in the coming days.

Portable’s latest actions have inspired a heated debate over if he can manage the unprecedented fame that has come his way in the long run.

Phrases such as “money miss road” and “fame miss road” — used to describe people who enjoy unmerited fame or wealth — have been associated with the musician on several occasions.

Portable sha is another definition of 'Money miss road' 🤣

The musician’s attitudes have also raised concerns over his health with some social media users insinuating he could be under the influence of excessive drugs and alcohol.

Portable has become a serious problem in the entertainment Industry, a whole celebrity moving around with thugs to beat someone up in 2022 ffs? he was even asking the to make videos, why is this guy always acting like someone who is under a speII?

Ossai Success, the aide to Ifeanyi Okowa, governor of Delta, had earlier said the singer needs to undergo urgent rehabilitation from drugs.

“Take Portable to alcohol and drug rehabilitation centre. As a young boy, I love Zazu singer Portable zeal of defeating poverty but the truth must be told,” he had written.

“There are a lot of misbehaviours in him that are associated with too much alcohol and drugs. This young boy needs to be taken care of before he get himself damaged all in the name of fame.”

Portable appears to be losing the widespread goodwill he has enjoyed since he came into the limelight.

Many people believe he needs to concentrate more on his craft to justify he indeed deserves the fame and support he is enjoying.

And they are right.

The showbiz sector thrives on reputation and brand loyalty. Portable has built a brand for himself but he needs the reputation and character to sustain people’s loyalty to it.

More is certainly expected from a man who rose from relative obscurity to prominence. Can be bridge the expectations? Time will tell.