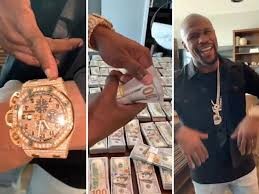 American boxing legend Floyd Mayweather showed off his opulence once more by flaunting a stunning £1.4million one-of-one Jacob and Co.

Boxing legend Floyd Mayweather took to Instagram to show off his obscene wealth with a photo of his £1.4million watch.

The retired boxer amassed a huge fortune from his astonishing 50-0 career across five different weight-classes before eventually walking away from the sport in 2015.

Dubbed ‘Money’ Mayweather for his enormous wealth and love of expensive goods, the American has since returned to the sport on a couple of occasions, fighting Conor McGregor and Jake Paul to earn hundreds of millions more.

And the 44-year-old has now once again jumped on social media site Instagram to showcase his wealth with a rare and personalised timepiece.

Mayweather posted a picture of himself kitted out in expensive garments and jewellery, but the most eye-catching of all was his ridiculously-priced watch. The timepiece in question features a multi-coloured open dial with a fly-back tourbillon, and is surrounded by an 18k white gold case and bracelet.

Including the dial, it boasts a remarkable total of 498 sparkling baguette-cut factory diamonds.

And it appears to be a favourite of the boxing icon, with Mayweather previously seen wearing the watch back in November 2019 at a Los Angeles Lakers basketball game.

Mayweather’s Instagram is littered with the star dressed head-to-toe in Louis Vuitton and other designer clothes.

He recently showed off a sleeveless leather jacket with a large orange ‘LV’ sign embossed on the back, along with Louis Vuitton leather boots.