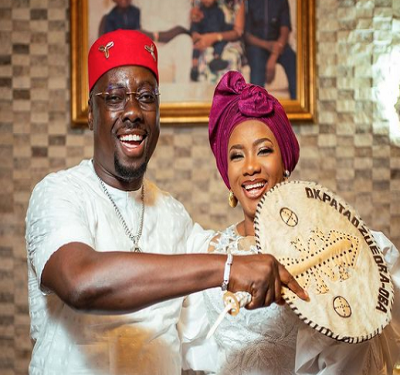 The socialite has remained on the lips of many after the lavish displays during his mum’s funeral, which has been described a carnival.

The mind-blowing burial was characterised by spraying of local and foreign currencies.

This led some to insinuate he probably has been involved in some form of diabolical acts to get money or even crime.

But the mother of four said people should quit hating and begin celebrating the grace upon her husband as juju or crime could never have done all these beautiful things for them.

The event planner further advised people to properly sieve information they are fed on social media.

She wrote;“If GRACE is a person, it is Obinna Iyiegbu.

“Am still trying to figure out what happened last weekend…but all I can see is GRACE!!!

“My brother, no be juju. no be crime. It’s just GRACE! The man is grace personified.

“Don’t get it twisted. Stop the hate & celebrate God’s grace upon his chosen one. What you celebrate is what you attract.

“Like he said, WORK HARD! Whom God has blessed…

“NB: pls don’t believe everything you read on social media.”