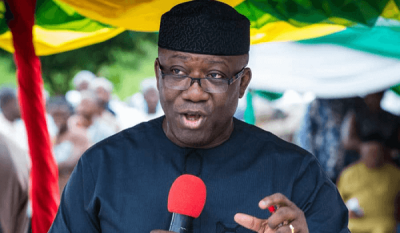 Ekiti Governor Kayode Fayemi has said his recent meeting with the National Leader of the All Progressives Congress (APC) Asiwaju Bola Tinubu had nothing to do with the 2023 presidential election.

Fayemi said he was not in any clandestine meeting with Tinubu to discuss his chance of becoming President but rather a family meeting of minds.

Fayemi held a closed-door meeting with the ex-Lagos Governor on January 12 where undisclosed issues were discussed fuelling insinuations that the former visited the latter to surrender his alleged presidential ambition.

But a statement by the Governor Chief Press Secretary, Yinka Oyebode, described as blatant lies insinuations that his principal had surrendered his undeclared ambition to Tinubu.

He said: “If Dr Fayemi eventually chooses to run in the 2023 presidential race at all, he would not hide his intention to do so, neither will he involve himself in any clandestine meeting to discuss his chances, since he would have been x-rayed and classified among the preferred aspirants based on his credentials, even before he makes such declaration.

“The meeting, which took place on Wednesday 12th January, however had no third party present and had nothing to do with the presidential ambition or otherwise of either of the two political leaders.

“It was a family meeting of minds. It is therefore disingenuous of the spin doctors who were nowhere near the venue of the meeting to begin to second guess discussions at the meeting.

“In a democratic setting like ours with so many issues begging for attention, discussion will go on daily among political leaders at various levels. Political leadership plays an indispensable role in foisting great responsibilities on people, thus both formal and informal discourses cannot be wished away.

“Creating a fictional social media frenzy out of such meeting where issues of national discourse are discussed would thus amount to an ill wind that blows no one any good.

“Asiwaju Tinubu is a former two-term Governor of Lagos State and national leader of the APC, while Dr. Fayemi, also a chieftain of the party, is the governor of Ekiti State and current Chairman of Nigeria Governors’ Forum.

“Meeting between the two leaders, dates as far back as their days in exile, when they were both involved in the struggle to wrest the country away from military jackboots, and has since been a regular occurrence both within and outside the country’s political space. So there should not be any big deal in seeing them meet, except someone has opted to create a mischief out of it.”

“Specifically, they have been dishing out barefaced and unsubstantiated lies that Dr Fayemi at the closed door meeting “debunked the raging rumour of his 2023 presidential ambition and pledged support for the national leader of the All Progressives Congress (APC) Asiwaju Bola Ahmed Tinubu.”

“This, no doubt, is a reckless and untruthful spin. First, since the perpetrators were not present at the meeting and none of the leaders could have divulged what transpired, one wonders from where they got their narrative.”

Why I’m Seeking To Represent Lagos West At Senate – Obanikoro