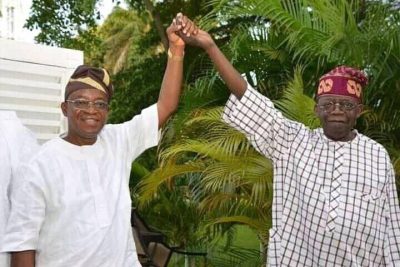 Some senior lawyers have stated that the judgment of Justice Emeka Nwite of a Federal High Court in Abuja, which nullified the nomination of Governor Gboyega Oyetola of Osun State and his deputy, Benedict Alabi, did not invalidate the candidacy of the presidential candidate of the All Progressives Congress, Asiwaju Bola Tinubu.

The senior lawyers, who spoke in separate interviews with The PUNCH are Oyetola’s lawyer, Kunle Adegoke, Afam Osigwe, and Reuben Atabo.

Oyetola and Alabi contested the July 16 governorship election on the platform of the APC, the same political party on which platform Tinubu would be contesting the 2023 presidential election.

The judge nullified their nomination on the ground that Governor Mai Buni, who submitted their names to the Independent National Electoral Commission, violated the provisions of Section 183 of the 1999 Constitution and Section 82(3) of the Electoral Act, 2022.

However, counsel for Oyetola, Adegoke told our correspondent that the team would appeal the verdict.

“We’re going on appeal straight away; no alternative to appeal,” he said, stressing that it does not invalidate Tinubu’s candidacy.

Adegoke added, “The judgment was on Friday, we have not filed it (appeal) but we will file within time. It cannot invalidate the Tinubu candidacy. The national convention has ratified everything the Buni-led executives did.

He said, “I will not want to comment on the judgment of Justice Nwite in respect to the ticket of the Osun State governor because he is on appeal.

In the Supreme Court judgment delivered on Eyitayo Jegede (SAN) and Rotimi Akeredolu (SAN), the Supreme Court had the opportunity to consider the defect of a party ticket/nomination paper of a candidate being signed by Governor Buni and the court referred to the decision of the Court of Appeal which talked about holding dual executive office, and the court opined that if there is even any defect in that, it does not affect the candidate who has emerged from the primaries.”

“So, in my own opinion, the two cases are different. While in Oyetola, Buni was the caretaker chairman, the court held that it was inappropriate, that he couldn’t hold two positions at the same time.” (Punch)