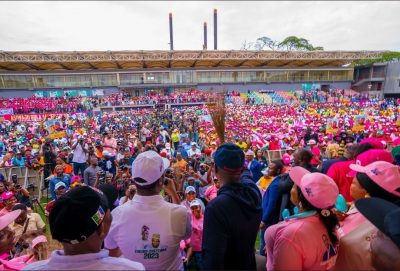 WOMEN in their large numbers, yesterday, shut down vehicular movement as they stormed various parts of Lagos in support of presidential candidacy of the All Progressives Congress, APC, Bola Tinubu/Kashima Shettima.

The women also expressed support for the second term bid of Governor Babajide Sanwo-Olu of Lagos State and his Deputy, Dr Femi Hamzat.

Meanwhile, Sanwo-Olu, his wife, Mr Ibijoke Sanwo-Olu; his deputy, Hamzat and wife, Mrs Oluremi Hamzat, led the women in rally, held along some selected areas of the metropolis

The women, who spotted different coloured T-Shirts with Tinubu’s insignia, chanted various solidarity songs in support of Tinubu/Shettima Presidency in 2023.

The activities led to traffic gridlock as motorists were forced to slow down to pass through narrow lane assigned for movement.

The group, mainly women, came out in large numbers as they marched at the Lagos Island, CMS and other areas  and terminated at Mobolaji Johnson Arena, formerly Onikan Stadium, Onikan, singing and hailing APC Presidential candidate of Tinubu/Shettima.

As of 1 pm, the rally was gradually spreading to other parts of Lagos, like Onigbongbo, Maryland, Onigbongbo Local Council Development Area, LCDA.