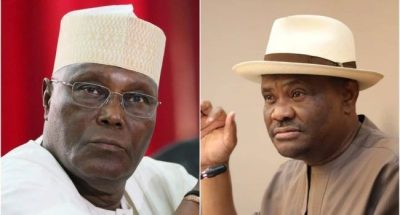 Okowa, at the end of the meeting, which held in the Delta State Governors Lodge, in Abuja, told journalists, that the party was intensifying efforts to resolve the crisis, which has pitched party leaders against themselves.

According to him, party leaders including governors are dialoguing on how to resolve the differences within the PDP ahead of the 2023 general elections.

The vice presidential candidate said that he was optimistic that all PDP leaders across the country would work for the success of the party in the 2023 general elections.

He said: “Governors and other members who are aggrieved are members of the party, I believe that my brothers would all work for the party. PDP is home and they belong to that home. They are not going to destroy their home.

Okowa added that the PDP leaders had fruitful interactions during its recent consultative meetings with stakeholders in the Southwest and Southeast.

“We had very useful interactions with all our leaders in the Southeast and I think that is a great plus for us as a party.

“I believe too that you’re aware that we were in the Southwest where we were very well received by Governor Seyi Makinde and the stakeholders of the party. The few issues are still left on the table.

“I am sure we’ll come to discuss it and in the next few days, we are convinced that will be largely reconciled,” he stated.

On his part, the BoT Chairman, Adolphus Wabara said that the board would meet with the PDP presidential candidate, Atiku Abubakar and Rivers governor, Nyesom Wike, in the coming days, as part of its efforts to finding a solution to the party’s crisis.

“In the coming days, we will also meet with the principal, the presidential candidate, former Vice President Abubakar and from there we will proceed to meet with Governor Wike.