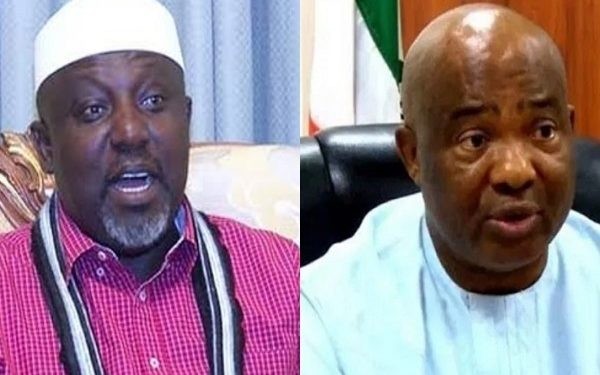 South East Governors’ Forum, on Monday waded into the feud between the governor of Imo State, Hope Uzodinma and his successor, Senator Rochas Okorocha.

Senator Okorocha was arrested on Sunday in Owerri for allegedly unsealing a property said to belong to the wife which was sealed by agents of the state government on Saturday.

The South-east governors in a statement by their chairman and Governor of Ebonyi State, David Umahi, urged the two political leaders of Imo State, Uzodinma and Okorocha of their preparedness to settle the disputes internally, instead of washing their dirty linen in the public.

The statement which was issued by Umahi’s Special Adviser on Media, Francis Nwaze.

Governor Umahi said he had already made contacts with Uzodinma and Okorocha and asked them to cease fire, adding that the parties to the dispute had agreed for a truce.

The Forum further explained that the leaders of the Southeast were capable of settling their disputes internally instead of washing their linen in the public.

“We call for calm among the supporters of the two political heavyweights to ensure a timely and amicable resolution of the disagreement within the shortest possible time.

“We call on people of Imo State and the South East Zone to go about their normal businesses and shun provocative statements until normalcy is completely restored between the former Governor and his successor,” the forum stated.(NAN)