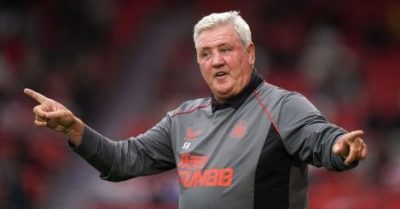 Former Newcastle United boss Steve Bruce wants to be the man to hold the fort until the end of the season at Man Utd, according to reports.

Bruce left St James’ Park by ‘mutual consent’ last month with the announcement coming 13 days after the club’s takeover by a Saudi-led consortium.

He left three days after his 1,000th game as a manager ended in a 3-2 home defeat to Tottenham, during which disgruntled fans renewed calls for him to go.

But now he is apparently ready for a quick return to management after Man Utd confirmed that Ole Gunnar Solskjaer had left his role on Sunday.

As soon as Man Utd called an emergency board meeting on Saturday night it was obvious the writing was on the wall for their former striker, who despite changing the atmosphere around the club following the toxic end of Jose Mourinho’s reign never really convinced in the role.

A 4-1 defeat to Watford on Saturday means Man Utd have now lost five of their last seven Premier League matches, while they have only won three of their last 11 fixtures.

However, Man Utd announced that they will appoint an interim manager to take over until the end of the season before deciding on a long-term replacement for Solskjaer.

And The Athletic claim that ‘former United captain Steve Bruce, recently let go by Newcastle, would be very keen on the role, and believes he could help stabilise the dressing room’.

Michael Carrick will take a caretaker role until the interim boss is found but former defender Gary Neville believes the club should be looking at ex-Tottenham manager and current Paris St Germain boss Mauricio Pochettino as a long-term option.

“He’s always been a stand-out candidate and the only name I’ve mentioned as someone I thought really suited Manchester United in terms of core principles and values and how they play, how he acts and behaves,” Neville told Sky Sports.

“They haven’t planned or prepared for this, it’s deteriorated so badly and so quickly; Michael takes over now, the only option the club had was to put someone in to the end of the season, that’s been obvious for the last few weeks.

“If there was a world-class manager sat on the shelf ready to go two or three weeks ago, I think Ole would have been gone by now.” (Football 365)