It was a night of honour, glitz, glamour, and celebration of creative excellence at the 2021 edition of the Lagos Advertising and Ideas Festival (LAIF) Awards by the Association of Advertising Agencies of Nigeria (AAAN) as X3M Marketing Ideas Limited, Dentsu MCGarrryBowenLimited, Insight Publicis Limited and Noah’s Ark Communications Limited win big at the event.

The award ceremony which was held on Saturday, November 20, 2021, at the Landmark Event Centre, Victoria Island, Lagos saw the Steve Babaeko–led X3M Marketing Ideas Limited emerge as the topmost ranked agency with 9 Gold, 16 Silver, and 8 Bronze. The Agency was also named the 2021 Agency of the Year.

Delivering his remarks at the event, the Special Guest of Honour, theGovernor of Lagos State, Mr. Babajide Sanwo-Olu who was represented by the Commissioner for Establishment, Training, and Pensions, Lagos State, Mrs. Ajibola Ponle, commended the organizers for consistently making the event a reality.

While assuring AAAN of his administration’s commitment and support toward the success of the industry, Sanwo-Olu noted that the advertising industry, by their creative works, has contributedimmensely in putting not only Lagos state but Nigeria on the global map.

In his welcome remarks, The President of the Association of Advertising Agencies of Nigeria(AAAN), Mr. Steve Babaeko, noted that the LAIF Awards remain the biggest platform to recognize and reward creativity in Nigeria.

Also speaking at the occasion, Chairman of the LAIF Awards Management Board, Mr. Lanre Adisa, explained that the 2021 edition of the award which is the 16th edition of the Festival received over 350 entries from a total of 21 Agencies. He disclosed that the entries submitted are creative works of the Agencies on 40 brands while about 28 jurors worked on the entries to determine the best works for the honours.

Adisa noted that despite the challenging period occasioned by the impact of the COVID-19 virus, many creative agencies demonstrateda great spirit of resilience by churning out works that could compete favourably with works from their counterparts in other countries or continents.

Another key highlight of the event was the induction of a renowned and celebrated amazon in the advertising industry, Julia Oku-Jacks,into the Lagos Advertising and Ideas Festival (LAIF) Awards Hall of Fame.

Two viral content creators and a non-governmental organizationnamely, Ikorodu Bois, Josh2 Funny , and Slum2School were equally given special awards and recognitions for their contribution in advancing the cause of creativity. 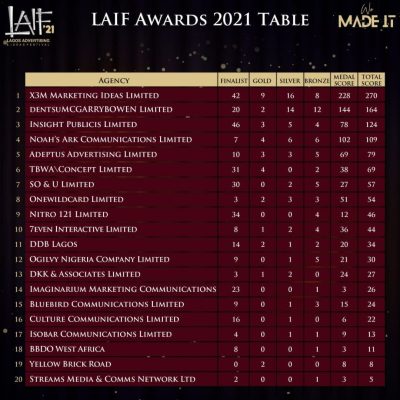