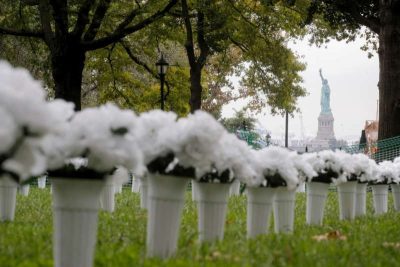 Homicides linked to firearms hit the highest rate in decades in the United States in 2020, the country’s public health agency has found, as the coronavirus pandemic intensified long-standing socioeconomic inequalities.

In a report released on Tuesday, the US Centers for Disease Control and Prevention (CDC) did not make a causal link between COVID-19 and gun violence, but said the pandemic “might have exacerbated existing social and economic stressors”, especially among ethnic and racial communities.

“Longstanding systemic inequities and structural racism have resulted in limited economic, housing, and educational opportunities associated with inequities in risk for violence and other health conditions among various racial and ethnic groups.”

Gun violence has been a problem across the US for decades, drawing condemnation and calls for tougher restrictions, especially in the aftermath of mass shootings at schools.

But powerful gun lobby groups have staunchly opposed efforts to pass stricter gun laws, while gun rights proponents regularly point to the Second Amendment of the US Constitution as guaranteeing the right to “keep and bear arms”.

The Gun Violence Archive, a US-based non-profit group, said on its website that as of Tuesday, more than 15,300 people had died as a result of gun violence, including in cases of deaths by suicide, so far this year.

The US also has recorded 185 mass shootings so far in 2022, according to the group, which defines a mass shooting as any incident in which four or more people are shot or killed, not including the attacker.

For example, the 2020 firearm homicide rate for Black men and boys between the ages of 10 and 24 was 21.6 times higher than the rate among white men and boys in the same age bracket – up from a ratio of 20.6 the year earlier.

The findings come as US President Joe Biden has denounced mass shootings as a “national embarrassment” and promised to enact stricter gun regulations. But he faces an uphill battle against gun lobby groups and legislators who are opposed to more restrictive gun laws.

Last month, Biden unveiled a new US Department of Justice rule that he said would crack down on the prevalence of so-called “ghost guns” – privately-made firearms without serial numbers that law enforcement agencies find at crime scenes.

At the same time, he urged Congress “to do its job” and pass budget allocations and other legislation to reduce gun crime.

That includes “legislation to require background checks for all gun sales, ensure that no terrorist can buy a weapon in the United States, ban the sale and possession of unserialized firearms — ghost guns, ban assault weapons and high-capacity magazines, and repeal gun manufacturers’ protection from liability”, the White House said in a fact sheet.

The CDC said on Tuesday that its report demonstrates the need to address the underlying factors that contribute to deaths by homicide and suicide, “including the underlying economic, physical, and social inequities that drive racial and ethnic disparities in multiple health outcomes”.

Housing assistance, childcare subsidies and livable wages can all help reduce poverty and other risk factors for violence, the CDC said, while communities can also work to increase green space to promote better living conditions. Support programmes for victims of violence are also important.

Why I want to become president – Saraki officially declares