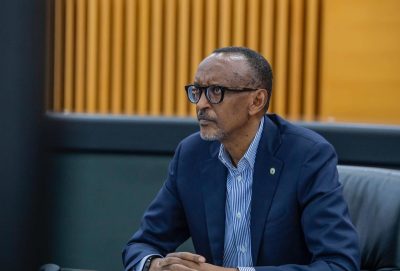 Paul Kagame, president of Rwanda, says his country’s agreement with the United Kingdom (UK) on asylum seekers is not for the “trading of human beings”.

He said on Thursday during a virtual seminar organised by Brown University.

On April 14, TheCable had reported that the UK government intends to begin sending asylum seekers to Rwanda for processing.

According to Boris Johnson, UK prime minister, the action became necessary to stop illegal migration and to prevent “vile people smugglers” from turning the ocean into a “watery graveyard”.

Since the announcement, the decision has elicited varied reactions, with refugee groups describing the decision as “cruel”, while some non-governmental organisations have disapproved of the funds earmarked for the project.

However, Kagame said his country is only trying to help and was approached because of its past experience in handling immigrants.

“To understand this problem better, we’ve got to go back a little bit into the history. This problem of dealing with immigrants does not start with what we arrived at as the deal between United Kingdom and Rwanda,” he said.

“Before that, let me talk about 2018 when we helped to deal with the situation in Libya. These people were stuck in Libya; they were trying to cross into Europe. Some had already died trying to cross the Mediterranean; others were kept in prisons in Libya, in different cities of Libya, and they were really stuck.

“So, we told those international institutions that were trying to deal with the problem and the countries and the UN that ‘why don’t you actually bring these people to Rwanda? Certainly what we can provide these people is better than being in a prison in Libya’.

“As we speak, there are some in Libya who have come in the recent months and there are other hundreds of them that have been processed in these camps in Rwanda and taken to Canada, to different parts of Europe, France, Scandinavian countries, even UK itself and US.”

He said the approach made the UK to seek Rwanda’s assistance on the immigration problem.

Kagame added that the Rwandan government is not being paid for its services, but that the UK is “going to provide resources to actually give some decent living to these people who will be here as they are processing to go back to the UK”.

“We were approached because of this history and because of what we managed with the Libya case. So, it would be mistaken for people to just make a conclusion, ‘oh, you know, Rwanda got money’,” he said.

“It’s not trading. We are not trading humans beings, please. This is not the case. We are actually helping.”
(The Cable)