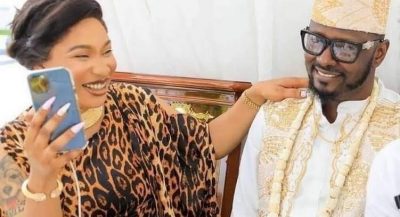 Prince Kpokpogri has warned Tonto Dikeh, saying no amount of blackmail can pull him down.

Kpokpogri made this known via his Instagram handle on Thursday, shortly after Tonto Dikeh claimed the politician has explicit recordings of a dancer, Jane Mena, and other celebrities.

Kpokpogri, however, called on the actress to desist from blackmailing him.

He stated that their relationship ended because of Tonto Dikeh’s addiction to smoking and alcohol and not because of any leaked tape.

Please read his full statement below

Knowing you has been pleasurable. It will be a disservice to the institution called love if I say it was a regret knowing you as it wasn’t. It may have been a short memory but it’s such that will last a lifetime.

Did I love you? Absolutely yes. In your weaknesses and vulnerability, I still loved you and was ready to walk you through the challenges of life. I gave you the chance to be yourself irrespective of the negative impression I was given about you. Despite warnings by top political and corporate friends to be careful while dating you, I opened up my heart to you and access to the sanctuary of my heart. It was all love nothing more. Apart from love and care expected of you as a lover, you had nothing to give me. You gave me a refurbished Hilux on my birthday without a SINGLE car paper, not even the custom paper or receipts showing it was bought and I returned it back to you. It took the intervention of your friend and my friend for me to grudgingly take it back from your house and park in mine.

In our hurts, we do not burn bridges for we will always cross them again. This tenet I have lived with all my life.

Countless times, I complained to our mutual friends of how tired I was due to your heavy smoking and drinking. I made it clear I was going to walk away if it continued yet you never stopped or made effort despite my willingness to stand by you till you gradually stop.

Long before the voice note was released, I ended the relationship. It was no shock then that after I called it quit, you allegedly conspired with a blogger who already reached out to you about the voice note before the breakup to now release it. I’m ready to foot the NDLEA cost to carry out a test on you if you never abused hard smoking and heavy drinking and if found to be false, I will waive my right to trial for one year. This was what broke us up and not an aftermath voice note.

I have deliberately avoided the issue of Janemena till now but it will be selfish of me to allow the poor lady who has lived and still living a virtuous life to be dragged into our breakup which has become messy. Is Janemena my friend? Yes! Beyond going to her shop opening years back, our relationship has only been on phone.

We have been family friends for years and the husband is someone that’s close to me. It is a taboo where I come from to sleep with a married woman even though I am still single, worse of all, with a married Isoko lady who will pay the ultimate price if she does that. Do not drag her and any other name in your imagination into our ship that has long sunk.

I have lived and living a clean life. No amount of blackmail can pull me down.

You can't pull me down: Kpokpogri hits back at Tonto Dikeh
0
Share FacebookTwitterGoogle+ReddItWhatsAppEmail