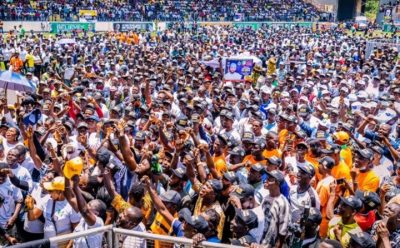 Understandably, the average Nigerian youth is tired of and frustrated by, the prostrate state of this country, which calls itself the giant of Africa.

The United Nations says youth is “a period of transition from the dependence of childhood to adulthood’s independence.” It is demography between leaving education and finding a first job and is regarded as more fluid than most other age groups.

The UN puts the age bracket of youth between 15 and 25 while acknowledging the rights of member states to define the demography in line with their realities. Perhaps that is why some Nigerians still regard themselves as “youths” while in the 50s and 60s, especially when there are political dividends attached, but I digress. If we follow the UN criterion, 2023 presents the first opportunity for most Nigerian youths to vote.

However, the tendency in Nigeria is to extend the qualification to youthfulness to about the age of 40. So, when 40-year-olds are appointed into positions of responsibility, some still describe them as “too young.” This is even though people in this age bracket have led many countries. Ageist stereotypes and prejudices are an almost eternal albatross in this society.

Given that political suffrage starts at age 18, it is safe to conclude that a youth, at least as far as the electoral process is concerned, is anyone between 18 and 40 years old. This would mean that those who now qualify to be youths in Nigeria were born between 1982 and 2004. These, almost without exception, are angry at the country, even though they have different ways of expression, as we see in the mind-blowing violence across the country. But focus is on those who ventilate their justifiable discontent through legitimate channels. Most of these have not known a country worth the name.

Recently, someone told me about a lady who was planning to emigrate. After becoming confident that her family would get their resident visas, she informed one of her children that the family would soon move to a country with an uninterrupted power supply. “Mummy, stop lying,” the ten-year-old reportedly screamed at his stunned mother, in response. He said that he was sure there was nowhere in the world where such luxury existed.

As trite as this example may appear, it exemplifies the denials that youths in Nigeria have been through. Anyone born in the eighties grew up under the deprivations and suppressions of military rule. Between 1984 and 1993, when military generals passed Nigeria from hand to hand like a baton, we moved from one crisis to the other. The country has had policies that strangled the economy, killed industries, and rendered people jobless. There have been self-serving governments that diminished the capacities of institutions to deliver on their mandates, dehumanised Nigerians, and turned citizens into refugees in their own country. The past 40 years is full of dim stories and only a few flickers of hope.

Take the return to civil rule in 1999, for instance. 23 years on, there is hardly any story of pride. The economy, despite its expansion, serves the interests of only a few; national institutions are completely paralysed; corruption has taken on a life of its own; unemployment is at an all-time high; the people are more divided than ever; and, worst of all, lives have become unsafe, if not worthless. Nigeria has been at its lowest for years on end, and the youths are now determined not to have it any longer.

So, on social media and physical platforms these days, youths sell 2023 as the year of change and are preparing for the elections. First, there is a massive campaign for youths to get their permanent voters’ cards (PVC), be ready to vote and defend those votes.

As part of the package, the preponderance of Nigerian youths also seems to have made up their minds concerning whom to vote for. They say it is the time to retire the two major parties, the ruling All Progressive Congress (APC) and the Peoples Democratic Party (PDP), both of which comprise people who have had roles in the misadventure of the past 60 years.

As much as it is the right of youths to make this change happen, since it’s all about their future, there must be a sense of caution in the ways we go about and execute this determination.

The first point to make is that Nigerians, young or otherwise, cannot afford to make emotional decisions now. Some will disagree, but this was the decision that Nigerians made in 2015 and seem to have jumped from frying pan to fire.

We must be clear-minded about the choices that we make in the coming elections. We should not be swayed by any form of propaganda or window-dressing. As manifestoes are usually not worth more than the paper they are written on in Nigeria, and political rallies are jamborees of paid loyalists where politicians hawk little other than entertainment, leaders of this movement for change must be clear about the characteristics and competencies Nigeria’s 21st leader should possess. They must then interrogate claims to those capacities.

The second thing is that elections are neither contested nor won on social media. Those who want to change Nigeria must prepare to get their hands dirty and step into the ring.

If Nigerian youths unite behind a particular candidate, they must be ready to convince others about the credentials of their candidate by embarking on grassroots mobilisation of the people. A substantial number of those who make up this demography are in the rural areas, without education and enough education to read between the lines that the movers of this change idea have identified. It must also be said that in trying to convert other people to voting, we should eliminate every form of righteous indignation. A corollary to this is that youths cannot do it alone, so we must make efforts to covert even those who belong to the old order.

Politics is not just about good or evil; it is about individual persuasions, mostly governed by level of understanding and, sometimes, personal interests. That is why democracy gives politicians the opportunity to campaign and win people over. And even when we don’t win them over, we must continue to respect their right to hold an opinion. Ultimately, Nigeria has dealt a significant blow to the psyche of most citizens and making enemies of one another helps no one.

Finally, we must realise that change is not just about elections. When the candidate of choice wins, work is just starting. A lot of things affect politicians when they get into office, that is why someone said they campaign in verse and govern in prose. The only way to ensure they remain focused on their promises and the needs of the people is to keep a tab on them and continually take them to task. Citizens have no business romancing or getting star-struck by politicians. It is possible to change those ruling Nigeria in 2023, but that would only be the beginning of the change that Nigeria needs.

Niran Adedokun can be reached via [email protected]