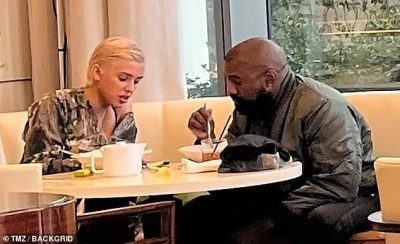 Kanye West has reportedly married once again two months after his divorce from Kim Kardashian was finalised.The rapper, 45, is said to have tied the knot to Yeezy architectural designer Bianca Censori in a private ceremony.Kanye and Bianca’s union is not reportedly legal, according to TMZ, as they have not filed a marriage certificate.However, the pair were seen appearing to wear matching wedding bands, which are said to symbolise their commitment to the ceremony.Kanye was seen wearing a ring on his wedding finger as he and Bianca arrived at the Waldorf Astoria in Beverly Hills. The couple were later photographed having lunch together.The rapper’s ex-wife Kim, 42, shared a series of cryptic quotes on her Instagram story amid the news.One read: “I’m really in my quiet girl eta, I don’t have much to say. Just much to do.”Another said: “Just remember, the black sheep usually turns into the goat. Keep doing you.”And a third and final quote read: “People who want to see you win, will help you win. Remember that.”Last month Kanye released a new song, reported to be a tribute to his new love, called Censori Overload.  (Mirror)

JUST IN: Manchester City’s Mendy found not guilty of six counts of rape