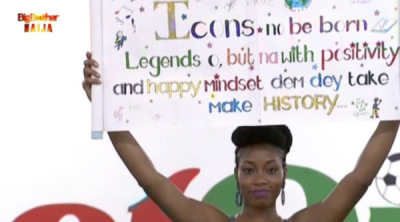 News Agency of Nigeria (NAN) reports that the group has been on a streak as this is their third win in a row following their nomination task win and previous wager win.

‘The Icons’ beat out ‘Cruisetopia’, whose members except Venita are already up for eviction, in the series of games set by Biggie on Thursday.

In line with the theme of the week, the ‘Pepper Dem Gang’ were tasked on three elements around the subject of healthy living.

Judged on creativity, participation and holistic messaging, ‘The Icons’ and ‘Cruisetopia’ teams each displayed elements which reflected the three features around the subject of healthy living.

For the first segment of this challenge, the teams were required to contribute to a cleaner environment by recycling items otherwise considered as waste in the House.

In this element, three members of each team took turns as they presented the recycled projects accomplished by the team.

‘The Icons’ presented a bunch of recycled items in the form of a television set, a chessboard, a teddy bear and an hourglass.

While team ‘Cruisetopia’ displayed their reused items in the form of an aeroplane, a mosaic painting and a car.

For the second presentation, both teams explained how relationships can be nourished and also how a healthy space for all to thrive can be created.

To this end, the teams were tasked to develop two separate talks on healthy relationships in seven minutes.

With Jackye and Esther representing team ‘Cruisetopia’, Elozonam and Cindy for ‘The Icons’, each team gave insightful points as they individually took turns to present separate talks on healthy relationships.

The third element challenged the teams to present twelve yoga poses as a means of creating a happy mind.

On this challenge, Sir Dee and Frodd represented ‘Cruisetopia’, while Mercy and Diane displayed on behalf of ‘The Icons’.

For the final wager presentation, Khafi (for ‘The Icons’) and Mike (for ‘Cruisetopia’) each had five minutes to present a single illustrated original positive and uplifting quote for both teams.

Meanwhile, for losing this week’s Wager Challenge, Biggie announced that team ‘Cruisetopia’ will be awarded a losing punishment reward.

For winning, ‘The Icons’ left the Arena with this week’s Wager trophy and a bonus of 20 Bet9ja Coins for each team member.