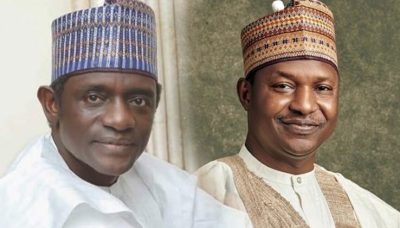 There are strong indications that the Yobe State Governor and Chairman of the Caretaker Committee of the All Progressives Congress, Mai Mala Buni, has intensified moves to prevent the party’s national convention scheduled for February from holding.

The PUNCH on Tuesday gathered that Buni’s moves had the backing of the Attorney-General of the Federation, Abubakar Malami, SAN; the Kebbi State Governor, Atiku Bagudu and his Jigawa State Governor counterpart, Muhammad Badaru.

It was learnt that as part of the plot, Buni-led caretaker committee was not interested in February convention so that it could remain in office till the emergence of the party’s presidential candidate.

A party leader, who confided in one of our correspondents, said, “Buni’s panel is desperate to prevent the convention from holding because the Yobe governor has vice-presidential ambition. That is why the governor is foot-dragging on the national convention issue. In a matter of days, the caretaker committee will come up with an excuse that the convention cannot hold in February because of the lingering crises in some states. It is part of the delay tactics.”

It was however gathered the majority of the governors had got wind of the plan of  Buni  and would move against him at their meeting today (Wednesday).

It was also learnt that the decision of APC  leader, Bola Tinubu, to contest the presidential election had unsettled the camp of Buni.

It was gathered that if the governors insisted on holding the planned February convention,  Buni and his backers  would push for the consensus method to elect national officers in order to maintain control of the party ahead of the primaries.

This is just as The PUNCH learnt on Tuesday that the delay by the Buni committee in picking a date for the convention was also propelled by Buni’s vice-presidential ambition which now makes it less likely if Tinubu emerges as the APC presidential candidate.

Based on this development, the governors of the APC, who support Tinubu’s ambition are already strategising on how to ensure that the convention holds as quickly as possible and in a transparent manner.

“It is true that there is a crisis in several states. But I can tell you categorically that the delays in holding this convention are caused in part by Buni’s ambition to be vice-president,” said a member of the Buni committee, who is sympathetic to the governors.

The President, Major General Muhammadu Buhari (retd.), had on June 25, 2020 dissolved the National Working Committee of the APC led by former Governor Adams Oshiomhole due to a crisis that was caused by Oshiomhole’s feud with his successor, Governor Godwin Obaseki of Edo State.

Based on pressure from some governors including Kebbi State Governor,  Bagudu;  Malami; Governor Kayode Fayemi of Ekiti State and his Jigawa State counterpart, Muhammad Badaru, the President at a meeting of the National Executive Council of the party, dissolved the NWC and appointed Buni as the leader of a 13-member committee.

The mandate of the Buni-led committee was to organise a national convention within six months but the committee continued to foot-drag, meeting Buhari regularly for extensions.

“Although we are 14 in the committee, Buni is the one that takes all decisions. He continued to shift the date for reasons best known to him,” he said.

When asked if the decision to delay the convention was not caused by the crisis in several states, the official said the crisis was indeed real but it was not enough to stall a national convention for so long.

He said, “The truth is that Buni got very comfortable and powerful in this position. A governor who is busy in his home state ought not to have time to be sitting down in Abuja.

“For the first six months, the committee achieved nothing apart from trying to convince governors of the Peoples Democratic Party to defect. So, that was how six months was spent when the core mandate of the committee was to organise a convention.

“This same committee organised the frivolous Anambra primary that has now been discredited by the court. They now want to supervise the Ekiti and Osun governorship primaries.”

The official further stated that the Buni committee had set up several sub-committees that had achieved nothing.

He said even the reconciliation committee led by Senator Abdullahi Adamu was just another avenue to waste more time.

“In March 2021, Buni set up the Congress Strategy and Contact Committee headed by Badaru which was supposed to submit a report on zoning of the Presidential election and other matters. They said at the time that the convention would hold in June 2021. That matter has since been forgotten.

“Buni set up a reconciliation committee on October 11 but the committee did not start its job until two months later. Obviously, everything is just delay tactics. The truth is that Buni has become so powerful that he wants to be able to determine the Presidential candidate of the APC who will pick him as a running mate,” he said.

When asked how Buni intended to achieve this, the official said the Yobe State governor and his backers that had succeeded in killing the idea of mandatory direct primaries and would ensure that both the chairman of the APC and the presidential candidate would emerge through consensus.

He said the consensus method would be used in edging out the likes of Tinubu who had a strong following in the party.

“We are going to put our foot down and demand that a date for the convention is announced this week. If not, we will take the gloves off. We will no longer allow a tiny cabal in the APC to take us for a ride. Even President Buhari, who is not seeking office, is growing frustrated with these games,” the source said.

When contacted on the telephone, the spokesman for the Yobe State Governor, Mamman Mohammed, said the issue  was a party affair not a Yobe State issue.

“We are presently in Abuja and this issue is a party affair not an issue of Yobe State where the governor governs. We are speaking with your colleague here in Abuja,” he said.

But the National Secretary of the Caretaker committee, John Akpanudoedehe, did not respond to a text message on Tuesday.

Also, efforts to get Governor Bagudu’s media to react to the plot to foist consensus arrangement on the party and edged out Tinubu did not succeed.

Even several calls and messages sent to his media aide, Yahaya Sarki, were not returned nor replied, as at the time of going to press.

But when asked about Malami’s role in the APC crisis, the Spokesman for the AGF, Dr Umar Gwandu, said his principal was preoccupied with his duties as the AGF.

“He is doing wonderfully well as the Attorney-General and not as a politician. Malami does not hold any office in the All Progressive Congress and plays no political role in the party.”

Someone is manipulating convention not to hold – PGF DG

Meanwhile, stakeholders of the APC have faulted the party’s current leadership for exuding a body language that disrespects the earlier proposed February national convention.

This is as they said that the party’s laxity in holding a convention is only a foretaste of the frictions that might hinder other critical milestones in the run-up to the 2023 elections.

Director-General of the Progressive Governors’ Forum, Salihu Lukman, said this on Tuesday in Abuja when delivering the keynote address at the APC Stakeholders Summit themed ‘Rebuilding the APC of our dreams’.

A distraught Lukman also faulted the idea of zoning, calling it a blast from the PDP years, which has done a great disservice to the quality of Nigeria’s leadership for decades.

He also said the lapse in communication between the APC and Nigerians had given the opposing Peoples Democratic Party a voice in recent times. He faulted the Buni-led committee for leaving a communication gap that the opposition had exploited.

Speaking of the national convention, Lukman said, “All of us as members and leaders are looking forward to a situation where we will wake up one morning, and we’ll be told that on so and so date and venue, the national convention of the party is going to take place. Unfortunately, we are wasting so much time.

“As human beings, when we struggle to get water to drink, what it simply means is that we will not have the capacity to find food. So, if we are struggling for a critical organ of the party such as the National Convention to hold, then how are we going to manage contests that will produce candidates?

“The danger signal is that we may end up having a convention that will not guarantee a healthy contest within the party. We need to get out of that. We think that February 5 will be the convention. Yet somebody just sat down somewhere and is manipulating it not to hold. And we are all taking it? We can’t have a political party that disrespects decisions.”

The DG also attributed the poor quality of leadership produced in the country to zoning, a system he faulted.

Lukman also said the poor communication among party members and the populace is the leading cause of the internal fever the APC is experiencing.

He took shots at the current National Secretary of the CECPC, John Akpanudoedehe, saying that the APC was suffering because it lacks a competent national secretary.

“We are now struggling to hold a convention. At the last count, there were nine aspirants for the chairmanship. By yesterday morning, I saw another person, making it 10. There are more coming. I recall that in 2014, we didn’t have that situation.

“Part of the reason was because meetings were taking place. So, leaders were able to consult and engage with one other and moderate the actions of everybody in the party. Now, because leaders have become overconfident, meetings are hardly taking place. It is now difficult to moderate the leaders’ excesses and even the caretaker committee. We must appeal to our leaders to return to that mode of having meetings. And they don’t need to expect agreement every time. This is what we need as a party.”

Efforts to make Akpanudoedehe respond to Lukman criticism did not succeed as he did not reply an SMS sent to him.

Meanwhile, a former representative of the Rivers South-East Senatorial district in the  National Assembly, Senator Magnus Abe has described  Tinubu as a promoter of excellence, saying he is capable and qualified to become Nigeria’s President in 2023.

Abe said this during a breakfast meeting with journalist in Port Harcourt, Rivers State capital on Tuesday.

Abe added,” The most important job of a leader is to pick people. If you look at the quality of people that Asiwaju picked and the way he promotes quality people in everything, they stand out.