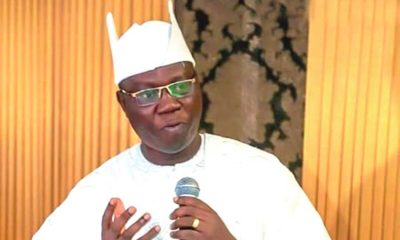 Aareonakakanfo of Yoruba land, Iba Gani Adams, at the weekend warned those fanning the ember of war to desist from acts that are capable of fueling ethnic and religious war in Nigeria.

He insisted that the South-West will resist any attempt that could trigger crisis and disturb the peace in the region.

While condemning the gruesome murder of Samuel Deborah, a 200 level Christian student of the Shehu Shagari College of Education, Sokoto, Iba Adams, in a statement by his Special Assistant on Media, Kehinde Aderemi, expressed sadness at the incident, even as he stated that the culprits should be apprehended and made to face the wrath of the law.

The Yoruba generalissimo also blamed the state government for allowing such sensitive issues to degenerate to a full blown crisis, where churches and other places of worship were razed by irate youths and extremists.

He condemned the act in its totality, maintaining that such could also jeopardize the fragile unity of the nation.

“We are in the midst of a full-blown crisis in Nigeria and unless something urgent is done, this may lead to a complete anarchy.

“There were reports of how some Northern extremists have invaded the South-West. They are everywhere perfecting their insidious plans to set the South-West on fire, but I want to state it categorically that such attempt could only trigger war because we will resist any  act that is  capable of fueling both ethnic or religious war in the South-West.

“Three days ago, the South West Security Stakeholders Group (SSSG) raised the alarm over the influx of non- Nigerians in the South-West. The Yoruba group expressed worry at the situation, saying those

non-Nigerians usually armed with knives, daggers and other harmful weapons, wherever they go and they are always ready to attack their victims.

“These religious fanatics have their  agenda. Their plan was to wreak untold and monumental havoc on the South-West region. However, we are aware of their plans and we will resist them by all means.

“The incident leading to Deborah’s murder showed the callousness of extremists. She was mobbed, assaulted, brutalised, lynched and heartlessly set on fire.

“This, as far as I am concerned, is the highest level of abuse to humanity and the soul of the deceased. It was purely a complete breakdown of law and order. A radical departure from what obtains in the world in this 21st Century.

“I am appealing to the Sokoto state governor, Malam Aminu Waziri Tambuwal to bring the culprits to book. None of them and their sponsors should go scot-free.

“There are laws that guarantee the safety of every citizen and such laws should be respected without rift and rancour. And anybody that goes against the laws must be punished accordingly.”