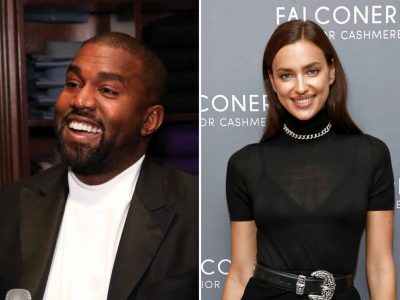 Kanye West appears to be shaking off his divorce from Kim Kardashian with Irina Shayk.

In photos obtained by the Daily Mail, the “All of the Lights” rapper can be seen on vacation in Provence, France, with the Russian-born model on Tuesday, which also happened to be West’s 44th birthday.

Putting on a very rare grin, West couldn’t contain his smile as he and Shayk, wearing a white crop top and black pants, walked through vineyards in the South of France.

Shayk, 35, and West were also accompanied by a group of people while walking the grounds of a luxury boutique hotel, though it’s unclear if they were members of his camp or hers.

This is West’s first public outing with a woman other than Kardashian amid their split. Shayk, meanwhile, was last romantically linked to Bradley Cooper, the father of her young daughter Lea.

Rumours of the pair’s romance began late last month, with claims that Kanye was ‘secretly’ dating the Russian supermodel, who shares a child with actor Bradley Cooper.

In the pictures, the duo can be seen enjoying their getaway surrounded by the beautiful idyllic countryside with the father-of-four even stopping to take pictures of Irina, as they appeared to be very comfortable around one another.

France has always been a favored destination for the Yeezy star, who has spent extensive time there with his estranged wife Kim – having whisked her off to Paris when they first began dating in 2012.

Kim famously sat front row at Kanye’s runway show during Paris Fashion Week in March 2012, which amplified the huge buzz surrounding their relationship at the time.

Then in 2014, ahead of their lavish nuptials in Florence, Italy, Kim and Kanye had an extravagant pre-wedding party at the Palace of Versailles in Paris.

It would seem that Kanye is already extremely fond of Irina, having chosen to spend his special day with the gorgeous model in a place that he holds so close to his heart.

Why I chose Yahaya Bello over south-west presidential…