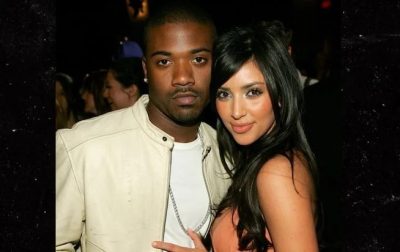 Ray J, the American singer, has alleged that Kim Kardashian and Kris Jenner were involved in the leak of their sex tape.

The ‘I Hit It First’ crooner was giving his side of the story about his 2007 sex tape with Kim in a chat with Daily Mail.

The 41-year-old singer denied leaking any of the videos, alleging it was a business partnership between him, Kim, and her mum.

He also appeared to have confirmed the existence of a second sex tape with Kim.

Ray – real name Ray Norwood – said Kim and Jenner gave the videos to Vivid Entertainment while they signed a contract for three tapes.

When the sex tape surfaced — about 14 years ago — Kim had sued Vivid Entertainment for invasion of privacy.

The reality star, however, dropped the suit and settled with the company for $5 million.

Speaking further, Ray said he only suggested the sex tape idea to Kim after they saw how Paris Hilton became famous after the film she made with poker player Rick Saloman was leaked.

“I’ve never leaked anything. I have never leaked a sex tape in my life. It has never been a leak. It’s always been a deal and a partnership between Kris Jenner and Kim and me,” he said.

“We’ve always been partners since the beginning of this thing. Once I pitched the idea to Kim, just playing around a little bit, that’s when she jumped on the idea, talked to her mom and it was out of my hands from there.

“I’ve sat in the shadows for over 14 years, allowing the Kardashians to use my name, to abuse my name, make billions of dollars over a decade-and-a-half talking about a topic I’ve never really spoken about.

“I never had a single one at my house, she had them at her house. She’s always had all the tapes in a Nike shoebox under her bed.”

Ray J and Kim dated from 2002 till 2007. The relationship, however, hit the rocks following the release of the sex tapes. (The Cable)

Lagos-Ibadan highway to be commissioned in June, says FG