My kids are my weakness, says Wizkid 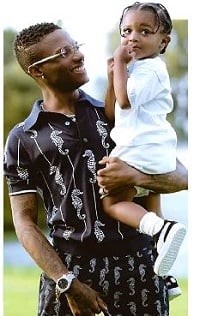 Ayodeji Ibrahim Balogun aka Wizkid is a man of many parts and several people across the globe view him in the closest prism to them.

Interestingly, the superstar says his three sons – Boluwatife, Ayodeji, and Zion – are his weakness in life.

In an interview on RED Radio, Wizkid said, “My kids are my kryptonite,” when asked what is his weakness in life.

Revealing some of his unknown emotions, Wizkid, who said he doesn’t watch football, said whenever he makes an album, he sees himself painting a mood for listeners and fans on tape just like an artist paints on a canvass.

Unknown to many fans and close associates, Wizkid says ‘Blessed,’ the song which features Damian Marley on his album, ‘Made In Lagos,’ is the song that touches him most of all the songs on the album. “Blessed, on Made In Lagos, which featured Damian Marley, touched me the most in the album because that was a very spiritual session.” The Grammy-award recipient went further to reveal that Damian Marley remains the only celebrity that he’s star-struck by.

As of this moment, Wizkid is booked for a North America and U.S cities tour with almost all the tickets sold out. Notwithstanding, the 31-year-old singer is already looking forward to working on his next project, although at his own pace. “My next album will be an elevation of the sound and continues from where Made In Lagos stopped.”

Wizkid’s collaboration with Tems on the song, ‘Essence,’ has become a hit that made it to the Billboard chart. The song debuted at No 82 and has remained on the chart for over three weeks.