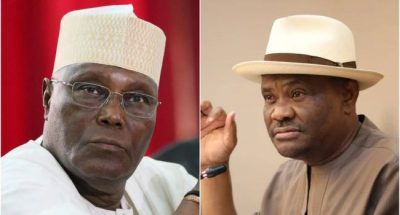 Ahead of the rescheduled reconciliation meeting between the Peoples Democratic Party presidential candidate and former vice president, Atiku Abubakar and the Rivers State Governor, Nyesome Wike’s camps on Friday, there are strong indications the governor’s camp has soft-pedaled on its insistence on resignation of the national chairman, Iyorchia Ayu.

This is as the Abubakar Atiku campaign machinery is reportedly considering “a crucial and key role” for the outspoken governor.

“The political relevance of Governor Wike cannot be wished away. He has both the reach and clout to help reverse the fortunes of the PDP from an opposition party to a ruling party in the 2023 presidential election. Not only is he relevant, he’s also a loyal party member. Both the party and Atiku are aware of that. I can assure you that Wike will help drive the party to victory,” a party chieftain told Daily Sun, last night.

Cracks in the PDP widened after Atiku ignored Wike, who came second at the presidential primary and announced Delta State Governor Ifeanyi Okowa as his running mate.

In the run-up to the primary, Ayu had pledged to “step down after a presidential candidate emerges and happens to be in the north.”

He added that he was willing to do everything to promote the interest and image of my party.

“Luckily, party positions we have agreed are not tied to executive and legislative positions. However, I’m a very democratic person and I will do everything to promote the interest and image of my party,” he had said.

“If the PDP says I should step down after a presidential candidate emerges and happens to be in the north, I will be very glad to do so because what we want is to take over the government and run it in the interest of Nigerians. I’ll sacrifice anything to ensure that my party wins.”

But his present stand runs counter to the promise he made in October 2021.

However, multiple sources confirmed to Daily Sun, yesterday, that the aggrieved party members were reviewing their position on him vacating his seat for a southerner.

“The truth of the matter is that we want to win election. So, there are certain things we want to consider before we push harder. They will only have to sort out some other grey areas,” one of the sources said.

Another source added that the demand for his resignation has “actually been dropped by the Wike group. The next meeting for negotiation will among other things determine how he would be involved in the campaign has been scheduled for Friday.”

Loyalists of  the Rivers governors, at a meeting in Abuja, recently, had,  among other issues, insisted on Ayu’s resignation as a condition for reconciliation.

However, the demand had generated diverse reactions in the party, with the National Publicity Secretary, Debo Ologunagba, saying that Ayu cannot be replaced as the party does not want to go into 2023 polls with a constitutional crisis.

On Monday, Ayu in a statement issued by his media aide, Simon Imobo-Tswam, said he was not contemplating resigning his office, pointing out that he was voted for a four years tenure. Daily Sun gathered that a meeting of Atiku and Wike camps which was scheduled for Monday could not hold as the Atiku team led by Adamawa State Governor, Ahmadu Fintiri, could not travel to Port Harcourt, the venue of the meeting.

Meanwhile, Wike has described as inconsequential the confession of support by some politicians for Atiku that they are not working to mobilise grassroots voters to secure electoral victory for the party. He said it is the quantum of individual votes from units, local government areas and states that would determined victory for Atiku and not rumour peddling.

Governor Wike whodescribed himself as a practical and practising politician, admonished that any party that wants to win election cannot be fighting itself.

“I think a party that wants to win election cannot on their own be causing problem for themselves.”

He pointed to how his administration has continued to flag-off and inaugurate projects that serve as evidence of fulfilled electoral promises, which have sustained the trust that the people have for the PDP in the state.

Speaking at the inauguration of the new government VIP lounge at the Port Harcourt International Airport, Wike said it was unfortunate that some politicians now based in Abuja derive pleasure from making insinuation  against him to curry Atiku’s favour.

“We are busy campaigning with our projects on how our party will win election in the state, other people are busy in Abuja currying rumours and gossips. We are busy here (Rivers) from Monday, Tuesday, Wednesday, Thursday, Friday, and Saturday. We’ll start Monday again, flagging off projects, commissioning projects that will sell our party.

“Everyday in the newspapers, Wike did this, Wike did that, then they will call the candidate, you see what I said about Wike today. Rent seekers. No job. Instead of you to do something that will make your party to win 2023 elections, you’re only busy everyday Wike said this. Where you heard from Wike I do not know, maybe in your dream.  You want to support the candidate, you’re not at home, you’re in Abuja. Come home and campaign and work for the party. Stop this Abuja politics of carrying rumours to the candidate.”