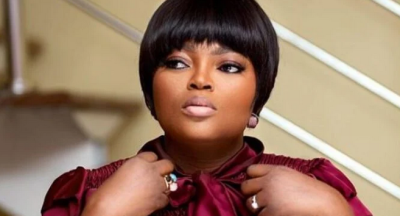 Gbenga Ogunleye, media aide to Olajide Adediran, governorship candidate of the Peoples Democratic Party (PDP) in Lagos, says Funke Akindele, a Nigerian actress, is one of those being considered as running mate.

Ogunleye, head of media and communications of the campaign organisation for Adediran, better known as Jandor, said this on Friday.

His statement comes on the heels of a poster making the rounds on social media, wherein Funke is named as the running mate to the PDP governorship candidate for the 2023 elections.

When TheCable reached out to Ogunleye, he said the actress is one of the five persons under consideration as Jandor’s running mate, but she hasn’t been confirmed.

“She was nominated alongside four other people, whose names are Gbadebo Rhodes-Vivour, Kolawole Vaughan, Adenike Shobajo and [Rasheed] Teslim-Balogun. Jandor has not named anyone as his running mate yet.”

Adediran, lead visioner of the Lagos4Lagos Movement, clinched the governorship ticket of the PDP in Lagos state in May.

Meanwhile, the Independent National Electoral Commission (INEC) has given political parties till July 15 to submit nominations for governorship candidates, while August 12 is the final deadline for withdrawal and replacement of candidates.

The governorship election is scheduled for March 11, 2023.  (The Cable)