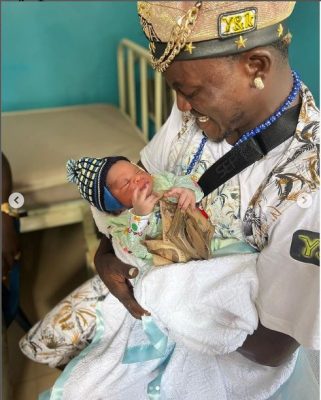 Fast-rising Nigerian singer, rapper, and dancer, Portable Omolalomi whose real name is Habeeb Okikiola is the proud father to his second son.

The controversial singer took to social media on Tuesday to announce the arrival of his newborn.

In a post on his Instagram page, the Zazu crooner showed off his second child with his baby mama, Omobewaji with cute photos of him carrying the boy.

In March, the Odogwu bitters ambassador and his lover announced that she was expecting a baby for him.

The singer in an interview in January, the Zazoo Zeh crooner talked about his relationship, background, and rise to stardom while revealing he has two sons from different mothers.

Portable rose to fame after getting Olamide and dancer Poco Lee to feature in the now-famous hit single ‘Zazu Zeh.’

Dangote Cement Shareholders up dividend by 25% to N20 per share