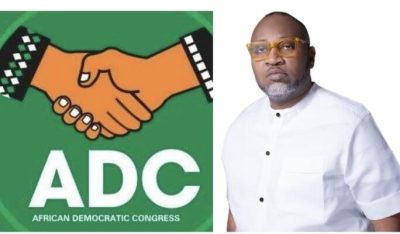 The United States government has obtained a default judgement confiscating the assets of Dumebi Kachikwu, presidential candidate of the African Democratic Congress (ADC), over the non-payment of his federal income taxes going up to $2.1 million.

Documents seen by Peoples Gazette, particularly case number 8:21-cv-01546-GJH filed in the United States District Court for the District of Maryland against Mr Kachikwu and his now ex-wife, Somachi, approved the seizure of assets in a default judgement after the defendants failed to respond to the summons and complaints served to their Maryland home in June 2021.

Mr Kachikwu, who runs Roots TV in Nigeria, evaded tax payment while working in the U.S between 2009 to 2011, a grave offence punishable by American law.

As of March 2, 2022, the accrual of the interests and statutory additions on Mr Kachikwu’s unpaid federal income tax liabilities had reached $2,082,500, The Gazette gleaned from the court documents.

According to U.S law, the tax liabilities will continue to accrue until paid in full by the Roots TV CEO and his ex-wife Somachi, daughter to Nigeria’s former aviation minister, Kema Chikwe and sister to popular rapper, Naeto C.

James E. Miller of the U.S Internal Revenue Service in September 2021 filed a motion for default judgement, after the defendants shunned all attempts to get them to settle their tax debts. The U.S district Court in Maryland granted the motion in March 2022.

The assets confiscated include a residential property at 8524 Churchill Downs road, Gaithersburg, Maryland.

Mr Kachikwu, not a first time offender, had previously been indicted in a fraud case in 2009. He had delivered a $100,000 cash bribe to curry the favour of former U.S. Congressman, William Jefferson, to broker business deals in Nigeria during the Olusegun Obasanjo administration.

The Roots Nigeria CEO was, however, let off the hook after he agreed to testify against Mr Jefferson in court. His testimony strengthened the argument of the prosecution team, leading to the conviction of the Congressman found guilty of bribery, racketeering amid other charges.

Mr Kachikwu emerged the ADC presidential candidate, offsetting Kingsley Moghalu, a former deputy governor of the Central Bank of Nigeria, in what party members described as a “dollarised” primary election.

When reached for comments, the media entrepreneur did not respond to messages of enquiry sent to his mobile phone. (Society  Reporters)