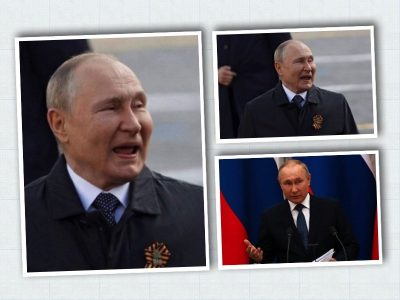 There was concern Tuesday about the health of Russian leader, Vladimir Putin after close shots of his face show him puffed up.

Two senior Americans raised questions about the likelihood that the Putin may be battling a yet to be announced ailment.

Jack Hopkins, a behavioural analyst suggested that Putin, who will be 70 on 7 October, may be suffering from a kind of cancer.

“Putin is dying. Every so slowly, but certainly surely. I managed an oncology floor for a year. I’ve seen this look hundreds of times”, he tweeted, with a photo of Putin.

The tweet was also retweeted by John Cooper, Majority Leader of Suffolk County Legislature, NY, with a caption: Putin is not looking so well”.

There is no information yet about Putin’s health from the Kremlin.

The paper based its scoop on a video off the mysterious Telegram channel “General SVR” that claims the Russian leader is so sick he must designate a temporary fill-in.

That person is Nikolai Patrushev, head of the Russian federal police’s Security Council, the Post added..

The concern about Putin’s health comes amid intelligence reports that Putin is preparing for a protracted war in Ukraine, despite the global food and energy shortages that the war has caused.

The US intelligence community believes that Russian President Vladimir Putin’s war in Ukraine is likely to become “more unpredictable and escalatory” in the coming months, the nation’s director of national intelligence told Congress on Tuesday.

Speaking to the Senate Armed Services Committee on Tuesday, Haines painted a grim and uncertain picture of the next phase of Putin’s months-old invasion. She said his next move will be difficult to predict in part because “Putin faces a mismatch between his ambitions and Russia’s current conventional military capabilities.”

Haines said the situation on the ground could “increase the likelihood that President Putin will turn to more drastic means.”

That could include “including imposing martial law, reorienting industrial production, or potentially escalatory military actions.”

She told lawmakers the intelligence community does not believe Putin would turn to the use of nuclear weapons unless he felt there was an existential threat to Russia.

Lt. Gen. Scott Berrier, the head of the Defense Intelligence Agency, also said specifically that the US does not anticipate Russia moving imminently to use a tactical or battlefield nuclear weapon.