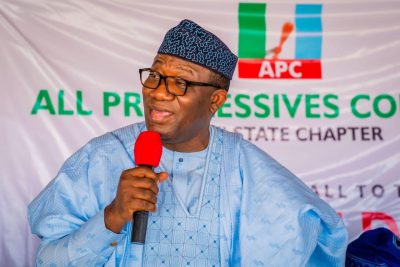 Fayemi, who said this during his presidential campaign tour in Maiduguri, added that he knew the nooks and crannies of the country and had served APC faithfully, and believes that the majority of the party delegates will vote for him to emerge the party’s flag bearer.

“I’m very confident of winning, I’m very very comfortable in the APC, I’m a foundation member of the APC and I know the nooks and crannies of this country.

“I have served the APC faithfully, I was the first Chairman of the Progressives Governors Forum and in that capacity, I served all my colleagues that were members of the Governors Forum then.

“Now that I’m the Chairman of the entire Nigeria Governors Forum, I have also gained the trust and confidence of all Governors in ensuring that I defend, protect and promote Nigeria in all spheres.

“This job that I seek is about improving the condition of the ordinary Nigerians and it’s an opportunity to build on the gains of President Muhammadu Buhari’s administration and also to address the gaps,” Fayemi said.

He added that he was not averse to allowing all presidential aspirants from across the country to vie for the APC ticket, pointing out that there are competent Nigerians in all parts of the country.

“Esteemed leaders and members of our great party, we are once again in the throes of another national electoral cycle at which Nigerians across the length and breadth of the nation wil be called upon to designate their preferred choice for the leadership of our beloved country.

“As can be expected, our great party, the All Progressives Congress (APC), will be a key factor and actor in the elections.

“And that is as it should be given that we are the ruling party at the federal centre, and are responsible for governing 22 states in the federation.

“Easily, we are the most national of parties. We also remain the most sought-after political association in the land.

“It will not be an exaggeration, and I know most of you will agree as well, that given our present preponderance in the national political system, the forthcoming elections will be very much about us as a party as about anything else.

“Nigerians reposed considerable trust in us when they voted us into office in 2015 and renewed our national mandate in 2019.

That trust also came with and continues to carry enormous responsibility that we have tried, even in the race of various odds, to discharge as faithfully as possible.”

“As a foundation member, and one of the many actors who worked tirelessly to help create the APC out of a coalition of like-minded parties and interests united by a progressive and forward looking to national commitment, unity and transformation, I was immeasurably proud of the zeal with which our cadres embraced the party’s agenda for change and renewal.

“And we were fortunate to be blessed from the outset with a leadership group who left no stone unturned to ensure that we went into election as a united force that could be trusted by Nigerians and which had to bereckoned with by our competitors.

“To the credit of our party and His Excellency, President Muhammadu Buhari, we have deliberately sought to make multiparty political competition in Nigeria less uncivil and much cleaner.

“We have also successfully ensured that the voices of citizens as the electorate count more than ever before. Edo and Anambra states are testimonies to the gallant effort that our President and leader has personally championed to make the national political system saner and more reflective of the true and genuine will of the people.

“We have every reason to be proud and to hold our heads high for these and other achievements. But we have, however, also been confronted with differing magnitudes challanges which are not always of our making, that have either obstructed us or even thwarted some of our noble plans.

“Not least among these challenges is the security situation in the country, a problem we inherited and which has continued to be a source of immense worry for all Nigerians, rightly so. The security question is one that must be topmost in our range of priorities.

“Added to this are adverse domestic pressures and external shocks on the economy that have affected our quest massively to dent unemployment and overcome some of its deleterious effects on the populace, especially our teeming population of young people.

“Esteemed import of the members foregoing of is the simple: APC, While the we can be proud of the road we have travelled since 2015, we cannot afford to rest on our laurels as a party or be complacent about anything.

“It is imperative that we openly and honestly acknowledge the important national tasks ahead and develop a coherent and comprehensive plan that can enable us to confront them.

“This we must do by resolutely learning lessons of experience. We should also be ready to mobilise ourselves for the urgent and necessary task of rebuilding the hope of our compatriots both in Project Nigeria and in our ability as a party.”

On the clamour by some APC leaders to zone the presidency to the south, Fayemi warned that competence must not be sacrificed on the altar of zoning, but want every part of the country to have a sense of belonging in governance.

The governor stated that he’s a bridge builder and stressed the need for inclusivity in the governance of the country.

“But when you have a multicultural, multi-religious divided society, you also need measures to build trust and confidence in the country, so that everybody can feel a sense of ownership and a sense of belonging.