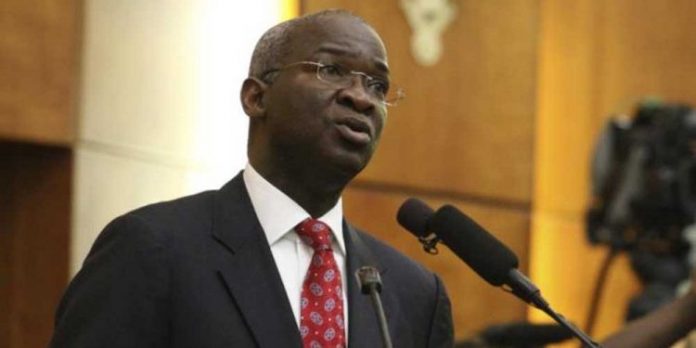 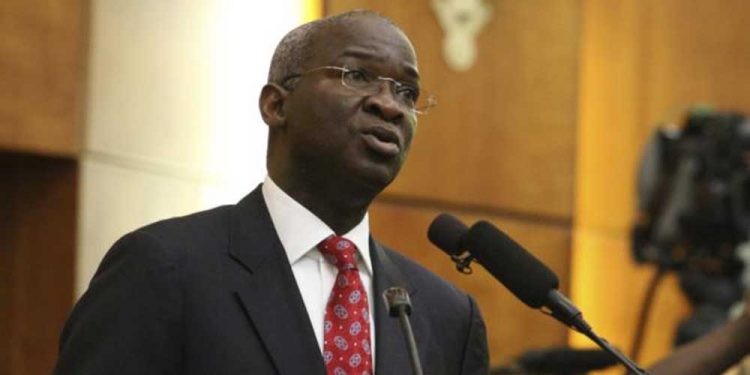 The Federal Government Monday began the evacuation of shanties, illegal structures encroaching on its Right of Way (RoW) following the expiration of the ultimatum issued by the Minister of Works and Housing, Mr. Babatunde Raji Fashola.

It will be recalled that Fashola on Jan. 14 while inspecting the Airport flyover damaged by tanker fire also visited artisans, mechanics and other businesses in the axis.

He had given them two weeks to vacate the RoW of the bridge and the ongoing Apapa-Oshodi-Ojota-Oworonshoki Expressway reconstruction project.

He advised them to relocate to the Matori Industrial Estate in Ladipo purposely built by the Jakande government for commercial activities, warning that they both jeopardise their safety and that of the highway by being on the road sides.

Enforcing the eviction alongside the Lagos State Task Force, the Federal Controller of Works in Lagos, Mr Olukayode Popoola said traders did not obey all notices served on them hence the evacuation.

Popoola said after the minister’s visit to the Ladipo axis on Apapa-Oshodi-Ojota-Oworonshoki Expressway project to address the traders, they failed to comply with negotiation terms.

He said that government had embarked on recovery of its Right of Way (RoW) nationwide and also the ongoing Apapa-Oshodi-Ojota-Oworonshoki Expressway reconstruction project being handled by the Dangote Group.

He said beautification was also part of the project and the contractor was ready to move to site to begin work and except the RoW was free, the project would be stalled.

“After the Honorable Minister addressed them, we gave them two weeks; we came and served them notices which expired on the 29th of January, 2020.

“Before that day I called a meeting of all the unions which I also reiterated the Honorable Minister’s directive to every one of them. They all agreed that they will move away.

“Now, after that, the Task Force gave them notices which expired on the 7th of February but as at today they remained adamant, they refused to remove all their properties, goods and vehicles.

“And that is why the Task Force was invited to come here and do the clearing of all the shanties so that we will be able to do our work on the service lane, so as to beautify the RoW and that is the purpose of coming to this place today, ” he said.

He said that the federal government was serious recovery of its RoW across the country and would sustain action in Lagos to ensure illegal businesses do not return to the road.

Popoola added that the enforcement would be extended to Apapa through the entire corridor to Oworonsoki to remove all impediments on the Apapa-Oshodi-Ojota-Oworonshoki Expressway project.

He advised businesses interested in beautification of the highway to approach the office of the minister for approval, adding that, that was the only approved initiative on the RoW.

The controller assured that owners of trucks and abandoned vehicles and other properties could recover them from the Task Force office, but would be made to promise not to return them to the highway.

The Nation reports that the Lagos State Task team led by Mr Shola Jejeloye towed abandoned and illegally parked vehicles on the RoW and removed other valuable items before destroying make shift stalls and shanties.

Some business owners who spoke to journalists appealed for government’s understanding of their plight.

Mr Martins Obidiozor, Manager of Unity Ware House along Toyota Bus stop said that the warehouse did not have space for vehicles to offload wares.

Obidiozor begged that his customer’s heavy duty equipment and goods be allowed to stay some more days on the highway before gradual removal to the warehouse.

A Toyota motor parts importer Aloysius Abuchukwu confirmed they were given two weeks by the Minister but added that the shops and Warehouses are too small to contain the number of containers they bring into the country per time. He asked the government to reconsider it’s hard stance and save their businesses.

Also, Mallam Ismaila Sule, a soft drinks vendor appealed to government to regulate their businesses instead of evacuating them from the road setback.

“If there is go slow and people want to drink water or soft drinks can they enter the big market? No. That is why we are begging government to help us,” he said.