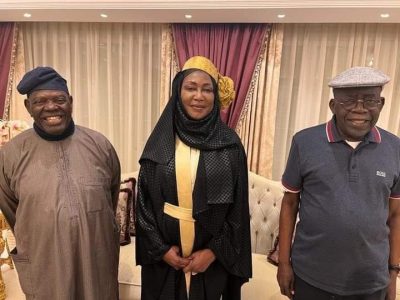 The Presidential Candidate of the All Progressives Congress, APC, Bola Ahmed Tinubu has been seen in London following his absence from the Peace accord signing ceremony for all 2023 Presidential candidates.

Several Nigerians have been seeking the whereabouts of the political leader following his inability to officially launch his Presidential Campaign on Wednesday as earlier scheduled.

It was widely reported that it was due to a fallout in the ruling APC over alterations made to the Presidential Campaign Council by Tinubu. However, it’s also believed to be due to ill health as the Lagos strongman is said to be secretly receiving medical attention in the UK.

However, POLITICS NIGERIA has been furnished with Photographs of Tinubu meeting with his ally and friend, Bisi Akande and Hajia Naja’atu Muhammad in London recently.