Tinubu’s wife will be in charge if he becomes president, says Naj’atu Muhammad 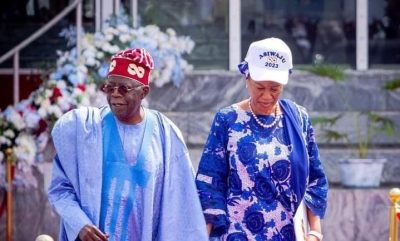 Naj’atu Muhammad, a former senator representing Kano central, says the wife of Bola Tinubu will be in charge of Nigeria if the latter is elected president.

She said this on Wednesday during a programme on African Independent Television (AIT).

The former senator had recently announced her resignation from the All Progressives Congress (APC).

“In this case, you know that those hangers-on are only pushing him knowing that he cannot do it and they will be the beneficiaries. He is just there like an idol,” Muhammad said.

“His wife will be doing the ruling. She will rule over the country and the other hangers, they even hate Asiwaju as far as I am concerned, because you cannot put somebody that is ill mentally into a position of leadership.

“What sort of people are we? This thing can come back and consume every one of us.”

Muhammad also spoke on why she decided to support Atiku Abubakar, the presidential candidate of the Peoples Democratic Party (PDP).

“I looked at the options in the APC. They go to rallies and Asiwaju cannot even decipher. When I was speaking with him, I sat with him for two hours and most of the time, he was sleeping,” she said.

“You ask him questions on this and he is talking completely differently from the topic you are discussing. So, how on earth, what is wrong with Nigerians? What is it that you benefit personally for you to sacrifice over 200 million people?”

She also said the APC presidential candidate told her he had no blueprint or agenda for the country.

“So, I decided. I said the choice now for me is between Asiwaju and Atiku because both of them have the structures in their parties. Then I looked for Atiku.

“I sat down with him and said ‘what is your blueprint on security and agriculture?’ They gave me a whole booklet, and it took me days to go through it.

“So, somebody I sat with said, ‘look, Najaatu, you are trying to choose between the devil and the deep sea’, and I said yes, I will rather go with the deep sea.”

While commenting on her exit from the APC, the former senator said it is silly to say her resignation from the party was a result of incompetence.

“I had to liberate myself from the shackles of the rope. That is why I took the positions that I took,” she said.

“It is so cheap and silly when they talk about how I was expelled for incompetence. At what point? And the party does not belong to Asiwaju. The party is headed by Abdullahi Adamu. He is the one to expel me from the party.” (The Cable)