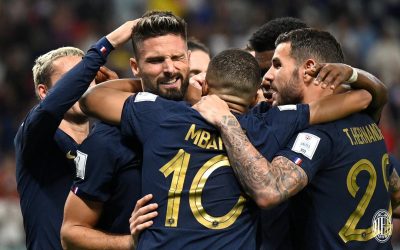 Defending champions France began their FIFA World Cup campaign with an impressive 4-1 comeback victory over the Socceroos of Australia in their Group D opener at the Al Janoub Stadium in Al Wakra, Qatar.

Two goals in each half from Adrien Rabiot, Olivier Giroud and Kylian Mbappé were enough to hand the 2018 World Cup winners a comfortable win.

Craig Goodwin put Australia ahead barely ten minutes into the encounter before Adrien Rabiot equalised for France just before the half hour mark.

Five minutes later, Giroud put Les Bleus in the lead for the first time thanks to an assist from Rabiot. Irvine almost levelled the score for Australia just before the half whistle but his header struck the post.

France’s dominance continued in the second half of the game with Mbappé doubling the lead in the 68th minute before assisting Giroud to hit a brace three minutes later.

With the goal, Giroud made history by equalling Thierry Henry’s record as the joint topscorer for the France national team with 51 goals each.

Giroud’s goal sealed the victory for France, sending them top of Group D with three points, with Denmark and Tunisia behind with one point apiece.

The other two matches that were played today ended in stalemates.

Denmark and Tunisia played a goalless draw at the Education City Stadium in Al Rayyan, Qatar in the other Group D fixture while Mexico and Poland also played goalless in the second Group C fixture.

Mexico legendary goalkeeper Guillermo Ochoa was the star man once again as he saved Robert Lewandowski’s second half penalty to earn a point for The Tricolor.

The Candidates: Atiku chickens out of presidential town hall debate