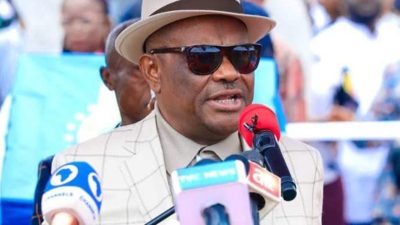 Rivers State Governor, Nyesom Wike, has presented the N550.6 billion Appropriation Bill for the 2023 fiscal year to the state House of Assembly for consideration.

The budget proposal, christened ‘Budget of Consolidation and Continuity,’ comprises capital and recurrent expenditure. He said it is targeted at delivering economic growth, additional infrastructure and prosperity for citizens.

The governor, while presenting the budget before state lawmakers in Port Harcourt, yesterday, explained that the sum of ₦350,977,495,537.00 has been mapped out as Capital Expenditure for the fiscal year 2023.

The amount, according to the governor, represents about 63.2 per cent of the total budget and conforms to the state practice of prioritising capital expenditures over recurrent.

“Accordingly, the sum of N114,264,480,208 is provided in the 2023 capital budget estimate to fund the completion of all ongoing roads and other physical infrastructural projects awarded by our administration.”

In the 2023 budget proposal, Wike said his administration has also proposed a recurrent expenditure of N175,249,692,497, representing about 31 per cent of the total budget for the 2023 fiscal year.

He stated that while no new projects may be awarded, except where such is considered very significant, the administration shall galvanise efforts and resources to complete all ongoing projects so that the new government can start on a clean slate, unencumbered.

The governor said that in 2021 and 2022, the government introduced fiscal measures, including a moratorium on external borrowing to achieve economic growth, fiscal discipline and financial consolidation.

These measures, according to him, have significantly blocked revenue leakages, improved the state capacity for internal revenue generation and prevented unsustainable deficit financing.

“We have, therefore, resolved to continue with the existing fiscal measures for the year 2023. This means that there would be no increase in tax rates. No new taxes will also be introduced.

“However, we will continue to intensify our drive to significantly improve IGR by expanding opportunities for more investments, industrialisation and efficient tax collection.”

The Speaker, Rivers State House of Assembly, Ikuinyi-Owaji Ibani, noted that Wike has through prudent allocation of resources put in place a roadmap for the development of the state.